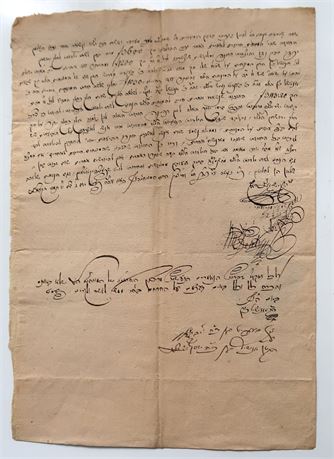 Document signed by the rabbinate of Pest including:

R. Simeon b. David Oppenheim (1753-1851), Rabbi of Pest. He was born in Kromau, Moravia, and passed on at Pest. His graveside has become an annual pilgrimage where many wonderful stories are told of miraculous deeds. He seems to have pursued his studies in Prague, where he lived at the end of the eighteenth century. He published: Ammud ha-Shahar (Prague, 1789) variation of of Baruch Lindau's text-book of geography, natural science; Nezer ha-Kodest (Ofen 1831) on religious ethics, which includes major parts of R. Jehiel ben Jekuthiel Anaw's "Ma'alot ha-Middot" (Cremona, 1556); Har ha-Karmel (Prague 1812), novellae on the laws, in the Yoreh De'ah, of menstruation and ritual bath. His father-in-law was R. Loeb Oppenheim, rabbi in Freistadt, from whom he adopted the family name.

R. Israel ben Solomon haLevi Wahrmann (1755-1824) was the first officially recognized rabbi of Pest, Hungary. He was born at Óbuda and educated at the Yeshiva of R. Eliezer Kalir. An erudite scholar he corresponded with many of the generation's great scholars including the Hatam Sofer. In 1799 he was called to the rabbinate of Pest, and was the first officially recognized rabbi of the community, which developed rapidly under his leadership. His insistence in the matter prompted the drafting of the community's first statutes. The most important institution connected with his name is the Nationalschule, an elementary school dedicated on 8 September 1814, which was an important factor in raising the intellectual status of the community, its curriculum including Hungarian, modern science, and Hebrew. R. Wahrmann published only one sermon, in German and entitled Andachtsübung der Israeliten der Königlichen Freistadt Pesth.