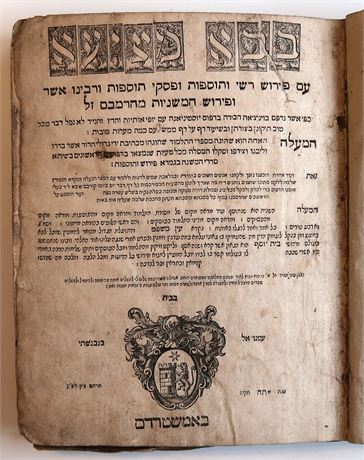 Babylonian Talmud, Tractate Bava Meziah. Small folio edition of the Talmud, most notable for the restoration of some material expurgated from the Basle Talmud. The printer, Immanuel (Emanuel de) Benveniste, was the scion of a distinguished Sephardic family that was among the Jewish refugees from the Iberian Peninsula. Benveniste mastered the printer's craft in his birthplace, Venice, and later settled in Amsterdam.

We are unusually well informed about the activities of the Benveniste press. Unlike earlier Talmud editions, where the press run can only be estimated, we know that Benveniste printed 3,000 copies, a single complete Talmud consisting of 5,940 folios. This is a significantly larger number of copies than were printed in the incunabula editions, at approximately 300 copies for a press run, and the early sixteenth century editions, estimated at 1,000-1,500 copies. At this time, editions of Hebrew titles varied from a low of 475 to a high of 10,000, with 3,000 copies being the average. Benveniste was also capable of much larger press runs. In 1643 he arranged with the Christian binders Magnus and Spanceerder to deliver within six weeks 8,000 bound prayerbooks that he had printed.