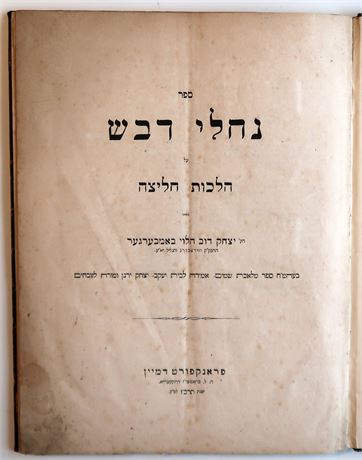 On the law of halizah by R. Isaac Dov ha-Levi Bamberger (Seligmann Baer, 1807–1878), rabbinical scholar and leader of German Orthodoxy. Born in the Bavarian village of Wiesenbronn, R. Bamberger studied at the yeshivah of Fuerth and in his native village. R. Bamberger opposed the proponents of Reform at a meeting of Jewish communities of Lower Franconia in 1834, and at an assembly of notables called by the Bavarian government in 1836 where he represented A. Bing, the district rabbi of Wuerzburg. In 1840 he was elected to succeed Bing in the face of fierce opposition from the Reformers. R. Bamberger continued the local yeshivah, founded an elementary school in 1855, and a teachers' training college in 1864. In 1872 he signed a declaration by German and Austrian rabbis demanding that Orthodox Jews leave the Reform-dominated, state-established congregations in accordance with the recently passed Secession Law. However, five years later he was induced by opponents of Secession in Frankfort to approve continued membership in congregations which provided for the needs of the Orthodox, thus lending his authority to the establishment of the so-called Communal Orthodoxy. This led to a heated controversy with R. S. R. Hirsch, the father of Secessionist Orthodoxy. In contrast to R. Hirsch and R. E. Hildesheimer, who spoke for the urban, middle-class ba'alei-battim, R. Bamberger represented (and typified) the unsophisticated, tradition-minded Landsjude of the small town and rural communities of southern Germany.

The "Wuerzburger Rav," as he was called, was one of the last great German-style talmudists, and his literary work was chiefly devoted to subjects of practical halakhah; Melekhet Shamayim (on the writing of Torah Scrolls etc., 1860); Amirah le-Veit Ya'akov (laws of interest to women, originally German in Hebrew characters, 1858); Moreh la-Zovehim (handbooks for shohatim, 1864); Nahalei Devash (on the law of halizah, 1867). Bamberger also wrote a commentary on Isaac ibn Ghayyat's halakhic compendium (Sha'arei Simhah, 2 pts., 1861–62) and a treatise on the Al Tikrei formula in Talmud and Midrash (Korei be-Emet, 2 pts., 1871–78). His responsa appeared posthumously in Zekher Simhah (1925), Neti'ah shel Simhah (1928), and Yad ha-Levi (1965), all published by one or another of his descendants. Together with A. Adler and M. Lehmann, Bamberger published a German translation of the Pentateuch (1873, 19137) on behalf of the Orthodox-Israelitische Bibelanstalt to counter L. Philippson's Bible translation, against which he had published a polemical pamphlet (1860).

Halitzah, according to the Torah, is the duty imposed only when the levir (brother of the deceased childless husband) willfully refuses to marry the yevamah, and not when he is unable to or prohibited from marrying her, for "whoever is subject [lit. "goes up"] to levirate marriage is subject to halitzah, and whoever is not subject to levirate marriage is not subject to halitzah " (Yev. 3a). Thus, for example, where a levirate marriage is precluded because the relationship would be incestuous, the widow (supposing she is the levir's daughter or his wife's sister) is also exempted from halitzah. According to Bet Hillel, if one of the deceased's several wives is prohibited from marrying the levir she also exempts her co-wives (ẓarah, "rival") and the "rivals of her rivals" (if the rival has married another man) from levirate marriage and halitzah, but Bet Shammai's opinion was that the rival is not thus exempted (Yev. 1:1; 1:4; cf. Yev. 16a and TJ, Yev. 1:6, 3a). On the other hand, it was determined that at times the duty of halitzah exists even where levirate marriage is forbidden – as between a priest and divorcee –by a "prohibition of holiness" (issur kedushah); in such a case halitzah is still required for, as in all cases of negative precepts, the marriage, even if prohibited, is nevertheless valid once it has taken place (Yev. 2:3 and Rashi ad loc.; TJ, Yev. 1:1, 2c; ). This rule also applies when doubt exists as to whether levirate marriage is incumbent on the widow, in which case Ḥaliẓah is required (Git. 7:3, et al.). In cases where the levir is seriously ill or there is a big difference in their ages, or the levir is "not suitable" (eino hagun) for the widow, etc., efforts were made to arrange for halitzah rather than marriage. In the course of time some scholars accepted the view that the duty of the halitzah always took priority over that of levirate marriage, a view stemming from the attempt to reconcile the prohibition on a man marrying his brother's wife (Lev. 18:16) with the command of levirate marriage. Today, the Rabbinical Courts Jurisdiction (Marriage and Divorce) Law, 5713–1953 of the State of Israel confers on the rabbinical court exclusive jurisdiction in a case where a woman sues her deceased husband's brother for haliẓah, and also with regard to maintenance for the woman until the day on which haliẓah is granted (sec. 5). Section 7 of the same law further provides that "Where a rabbinical court, by final judgment [i.e., when it can no longer be appealed against; sec. 8] has ordered that a man be compelled to give his brother's widow Ḥaliẓah, a district court may, upon expiration of three months from the day of making the order, on application of the attorney general, compel compliance with the order by imprisonment." A judgment compelling a levir to grant haliẓah will be given by the rabbinical court in similar circumstances to those in which it customarily sees fit to compel the grant of a divorce, and in certain additional cases, e.g., where the levir is already married (Tur and Sh. Ar., EH 165), but at all times only where compulsion is supported by halakhic authority so as not to bring about a prohibited "forced haliẓah" (Yev. 106a; Yad, Yibbum 4:25–26; Sh. Ar., EH 169:13). This procedure, so far as halakhically permitted, offers an effective means of dealing with a recalcitrant levir.