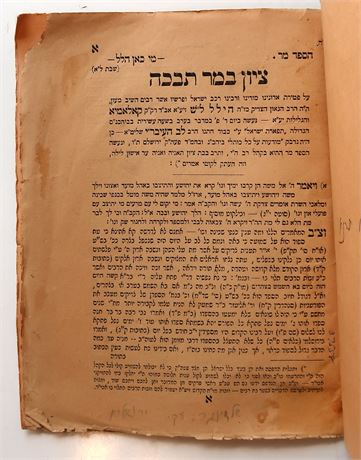 Eulogy for his father in law R. Hillel Lichtenstein by R. Akiva Yosef Schlesinger (1838-1922) a noted Orthodox Jewish rabbi who served as the rabbinical leader of Pressburg. R. Schlesinger was a disciple of R. Samuel Benjamin Sofer (the Ktav Sofer) and R. Moshe Schick (the Maharam Schick).

He was the author of the Lev haivri, a commentary on the last will and testament of R. Moses Sofer (the Chatam Sofer). Additionally, he is known for his unsuccessful attempt to reinstate the blowing of the shofar when Rosh Hashana falls on Shabbat, which had been banned since the times of the Talmud under the edict known as gezeirah d'Rabbah, named after Rabbah bar Nahmani, a noted amora of the late 3rd-early 4th centuries.

At times, he made very controversial statements regarding such things as the political nature of the early kollel systems of dispensing funds to poor Israeli Jews (not to be confused with the more contemporary use of the term kollel, which refers to post-graduate institutions of talmudic study) and the takanah d'Rabbeinu Gershom relating to polygamy. Because of this, there was a time when his written works were put under a cherem (ban).

R. Hillel b. Baruch Lichtenstein, (1815–1891), Hungarian rabbi. Lichtenstein was one of the outstanding pupils of R. Moses Sofer . He first served as rabbi of Margarethen and in 1854 was elected rabbi of Kolozsvar, the capital of Transylvania. After 18 months he was compelled to leave the locality without officially assuming office, owing to his opposition to Abraham Friedman, rabbi of Transylvania, and because of the internal frictions in the community which were aggravated as a result. His refusal to go to Gyulafehérvár (Alba-Julia ), where the district rabbi had his seat, to receive his sanction to take up his post, as was then the custom, served as the formal reason for his departure. Between 1865 and 1867 he was rabbi of Szikszó, also in Hungary. He then moved to Galicia and became rabbi of Kolomyya (Kolomea). R. Lichtenstein was one of the dominant figures of the Orthodox community in their struggle with the reformers both before and after the great schism of 1869. He fought against any suspicion of reform in the life of the Jews, and sharply criticized those Orthodox Jews, including rabbis, who inclined to any kind of innovation in religious practices. He especially attacked those who attempted to preach in German, and even censured R. Azriel Hildesheimer on this account. R. Lichtenstein's pupils also served as uncompromising fighters against religious reforms. At rabbinical conventions in Hungary, called on his initiative, the main principles of extremist Orthodoxy for Hungarian Jewry were laid down. The first convention of this kind assembled in Sátoraljaújhely in 1864 but the main one took place in 1866 in Nagymihály (Michalovce) where resolutions were adopted excommunicating Reform Judaism and any rabbi preaching in German or any other European language. Ten takkanot were also enacted, which to this day serve as the basis of the separation between Orthodox Jews and reformers in Hungary. R. Lichtenstein wrote many books, including Maskil el Dal, 4 parts, sermons (1860–69); Shirei Maskil, on ethics (1877); and Et La'asot, in Yiddish, on ethics, 2 parts (1878).