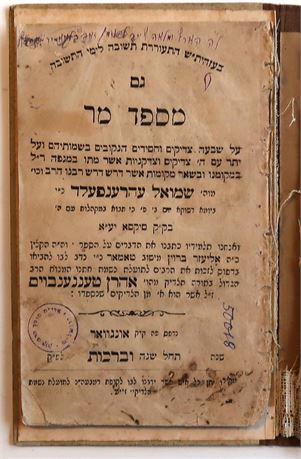 Eulogy on seven righteous and pious individuals, designated by name, and others of the Lord’s people, righteous men and women, who died in a plague in our place and other locations delivered by R. Samuel ben David Zevi Ehrenfeld. The eulogy was delivered on Monday, the market day, parashah Ki Tavo in the community of  סיקסא. It was recorded by his students who have brought it to press for the public good and to merit the souls of the departed. All of those named in the eulogy were important rabbis and heads of rabbinic courts.

R. Samuel ben David Zevi Ehrenfeld, (1835–1883) was a Hungarian rabbi known from his works as the "Hatan Sofer," ("son-in-law of Sofer" to indicate his connection by marriage with the famous R. Moses Sofer, and in assonance with the title of R. Sofer's responsa Hatam Sofer. Actually it was his father who was the son-in-law of R. Moses Sofer). R. Ehrenfeld was born in Pressburg. He studied under his father and in the yeshiva of Pressburg under R. Abraham Sofer, his maternal uncle. At first he engaged in business, but when this failed he accepted the rabbinate of Betlen (now Beclean, Rumania) in 1866. In 1868 he became rabbi in Szikszo, because of the opportunities which a larger yeshivah there afforded him. In 1877 he moved to Mattersdorf where his grandfather and other members of this family had served before him. He was able to devote himself completely to the interests of the community and the large yeshivah there. He died at Kierling, where he had gone to recuperate after a long illness. As a teacher he was able to impart his own approach to Talmud and halakhah, based on the clear understanding of the talmudic text and its relevance to the ultimate halakhah. <p>His clarity and complete mastery of all branches of halakhah is evident in his published works: Ateret Bahurim, Hatan Sofer (only one part, 1874), on various topics from Hoshen Mishpat, and Hatan Sofer on the Shulhan Arukh, Orah Hayyim (one part 1878; 2 vols. 19632), both having long aggadic introductions. He printed the biography of his grandfather as well as other historical matter. Hatan Sofer was edited with an introduction by his son, R. Simhah Bunim Ehrenfeld (1912), and contains a biography of his father. Misped Mar (1874) was his next work. A Passover Haggadah (1884) with his own commentary and that of his grandfather was edited by Rabbi Joseph Baumgarten (later rosh bet din of Vienna).