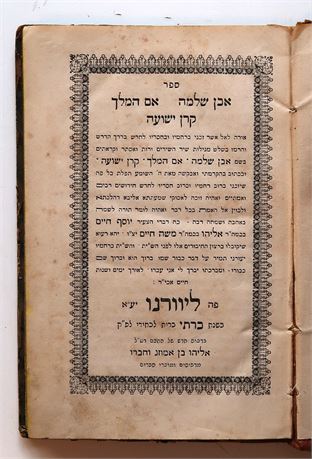 Commentary blended with halakha and Kabbalah on Song of Songs, Ruth, and Ecc.

R. Joseph Hayyim b. Elijah Al-Hakam (1833 or 1835–1909), was born in Baghdad, he studied with his maternal uncle, R. David Hai b. Meir. In 1848 he began to study under R. Abdallah Somekh. He succeeded his father (1859) as preacher, a post he held until his death. In 1869 he visited Erez Israel. In 1876 Jacob Obermeier of Vienna, who had come to Baghdad to teach French, insulted R. Joseph Hayyim. The community excommunicated him and compelled him to request the rabbi's pardon. Al-Hakam was renowned as a great halakhic authority who instituted many takkanot. He wrote some 60 works on all aspects of Torah, only a few of which have been published. He is best known for his Ben Ish Hai. His other published works include Ben Yehoyada (1898–1904), five volumes of commentaries to the aggadic portions of the Babylonian Talmud and Rav Pe'alim (1901–12), responsa. He wrote approximately 200 piyyutim and pizmonim, about 50 of which are incorporated in the liturgy of Baghdad Jewry; the rest are still in manuscript.