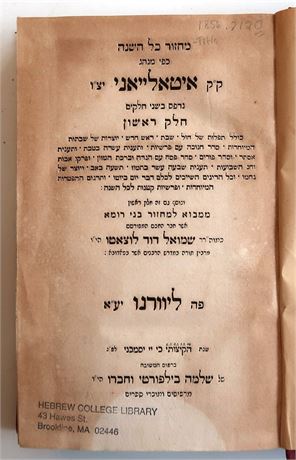 Originally called the Minhag Romi, later the Italian rite, which with the expansion of Roman Jewry became widely established in Italy and in one or two places overseas and was the parent of the Ashkenazi rite. The formulation of this is associated with the name of R. Menahem b. Solomon b. Isaac (12th cent.), author of the popular Midrash Sekhel Tov. The rite, also called Minhag ha-Lo'azim, is in use in Rome, in the interior of Italy, in a few communities in Salonika and Constantinople, and also in the Italian synagogue in Jerusalem.

Often referred to by the acronym of Shedal, the Italian scholar, philosopher, Bible commentator, and translator is descendent from a long line of scholars. He wrote his first Hebrew poem at the age of nine. His mother died when he was 13 and his father's pecuniary status declined seriously making it necessary for the young Luzzatto to assist his father in his work. His own wife died after a long illness, and he eventually married her sister. He survived two of his children - one Philoxenus (or Filosseno), had been a young man of especially great promise. Samuel David's translation of the Ashkenazi prayer book into Italian appeared in 1821/22, and that of the Italian rite in 1829. He established a regular correspondence with the Jewish scholar, Isaac Samuel Reggio, and through the efforts of the latter, Luzzatto was appointed professor of the newly established rabbinical college of Padua in 1829. There he spent the rest of his life teaching Bible, philology, philosophy, and Jewish history. His versatility and the scope of his learning are best seen in the mass of letters written to all the outstanding Jewish savants of the day - to Geiger, Zunz, Rapoport, Steinschneider and others. He wrote a Hebrew commentary on the Pentateuch and the Haftarot. It is in this type of work that his attitude to Judaism is revealed. He was a traditionalist and maintained a firm belief in revelation and treated the text of the Torah with sacred regard although he occasionally allowed himself to depart from the traditional phrasing of the words as reflected in the Masorah and the Talmud.