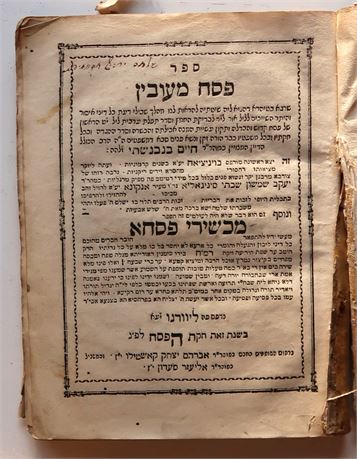 With the commentary of R. Hayyim Benveniste. Each page printed within frame.

R. Hayyim b. Israel Benveniste (1603–1673), Sephardi rabbinic scholar and codifier, studied in his native Constantinople mainly under R. Joseph b. Moses of Trani, and also under Joseph Samegah. In 1624, when he was only 21, he began to write his detailed commentary on the Sefer Mitzvot Gadol of R. Moses b. Jacob of Coucy, which he called Dina de-Hayyei ("Law of the Living"). The same year he was appointed to decide cases dealing with ritual law (Issur ve-Hetter). Benveniste was rabbi in Tirya, near Smyrna, from 1643 to 1655 when he settled in Smyrna. When Chief Rabbi Joseph Escapa of Smyrna reached an advanced age, Benveniste was appointed in 1661 to act for him in matters of ritual and matrimonial law, and succeeded him after his death the following year. In 1665 the council of the city's scholars (with Benveniste's consent) appointed R. Aaron Lapapa in charge of civil cases, but at the end of the same year the latter was deposed by the many admirers of Shabbetai Zevi, whom R. Lapapa had excommunicated and condemned to death. After Shabbetai Zevi's conversion to Islam a small section of the Smyrna community unsuccessfully attempted to reinstate R. Lapapa. As a result, R. Benveniste became involved in a dispute with Lapapa. R. Benveniste's attitude to the Shabbatean movement as a whole was entirely negative, but he sought to avoid controversy in the interest of communal harmony, and was not resolute enough in certain instances to oppose openly the majority of his community, who followed Shabbetai Zevi and his followers.

R. Benveniste's role in this episode however did not detract from his dignity and authority as one of the greatest of the Jewish codifiers. Among his many disciples were R. Solomon ibn Ezra, R. Isaac Algazi, R. Hayyim Algazi, and R. Abraham b. Aaron de Boton. His principal work Keneset ha-Gedolah, was accepted by both Ashkenazi and Sephardi rabbis as an authoritative work of great practical value. In his work, which comprises eight large volumes, R. Benveniste cites and methodically explains all the conclusions and legal novellae to be found in the responsa and other halakhic works of the outstanding authorities after the time of R. Joseph Caro, as well as some of the decisions of earlier scholars whom R. Caro had failed to cite.

In R. Benveniste's lifetime only three parts of the work were printed: on Orah Hayyim (Leghorn, 1658); Sheyarei, addenda on Orah Hayyim (Smyrna, 1671); and on Hoshen Mishpat (part 1, Smyrna, 1660). After his death there appeared the volume on Yoreh De'ah (3 parts, Constanti—nople, 1711–17); on Even ha-Ezer (Smyrna, 1731, new ed. Lemberg, 1861); on Hoshen Mishpat, part 2, with several appendixes by other authors (Smyrna, 1734). Also his Dina de-Hayyei was published posthumously from a defective manuscript (Constantinople, 2 pts. 1747). Additional legal novellae on the Hoshen Mishpat are to be found in R. Hayyim b. Menahem Algazi's Benei Hayyai published in Orta-koi (near Constantinople) in 1712. R. Benveniste also wrote important responsa (Ba'ei Hayyei, "Needs of the Living"), on the four parts of the Turim, the following of which have been published: on Orah Hayyim (part 2, Salonika, 1783), on 211 sections of Yoreh De'ah and on 24 of the Even ha-Ezer (ibid., 1788), as well as on the Hoshen Mishpat, in two parts (ibid., 1791). R. Benveniste also wrote novellae on a number of tractates: that on Sanhedrin which he called Hamra ve-Hayyei, only part of which is extant, was published, together with notes and extracts from the manuscripts of the novellae of the earlier halakhic authorities, under the title of Hemer Hivver Attik (Leghorn, 1802). R. Benveniste's son Israel (1644–1729) succeeded him as chief rabbi of Smyrna.