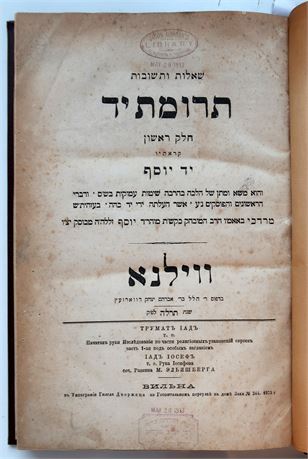 Only edition of these responsa by R. Mordechai ben Joseph Eliasberg (Elsherberg). The title-page describes it as part on, entitled Yad Yosef, but there is no indication that any other parts were printed. Terumas Yad is described as being on halakhah in depth addressing varied positions in Shass, the works of rishonim, and poskim. Terumas Yad is comprised of fifty-six responsa, each a detailed discussion of the halakhic issue addressed. The text is followed, with a separate title-page by Keset Yahonson, on other issues in halakhah.

R. Mordechai ben Joseph Eliasberg (1817–1889) was a rabbi, public activist, and early leader of religious Zionism. He studied in the Volozhin yeshiva and served as rabbi in Bauska, Latvia, from 1862 until his death. Fluent in German and well versed in contemporary literature, R. Eliasberg firmly believed that there was no contradiction between faith and the Haskalah (Enlightenment). Nonetheless, he expressed concern about what was at the time called “false enlightenment” (i.e., enlightenment that serves social purposes such as secularizing society), which he felt posed a great danger to faith. He also believed in the importance of improving the economic situation of Russian Jews.

R. Eliasberg was deeply influenced by Tsevi Hirsh Kalischer, and already in the 1870s was publishing articles calling for the settlement of the Land of Israel. Like Kalischer, Eliasberg was deeply impressed by the emancipation of Jews in various countries, a development that (more than antisemitism) fostered his faith in the Jewish people’s future in its own land. He promoted the idea of a Jewish utopia, marked by Jews supporting themselves through productive work in agriculture and industry and living modest lives. Eliasberg was also one of the first proponents of religious Zionism. According to his understanding, both the people and the land of Israel are holy, the sanctity of the one not canceling out that of the other.

In halakhic matters, Eliasberg inclined toward leniency. He vigorously supported the rabbinic dispensation to engage in agricultural work during the religiously prescribed sabbatical year, in opposition to many of his colleagues.