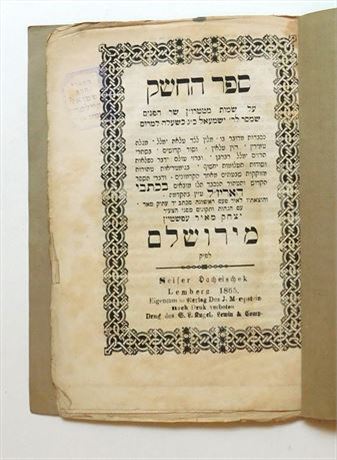 First edition on the names of the angel Matatron brought to press by R. Isaac Meir Epstein. The full title is given as Sefer ha-Heshek on the names of Matatron Sar ha-Panim (angel) given over to R. Ishmael Kohen Gadol when he ascended above. This book is based on the teachings of the Ari ha-Kodesh. There is an approbation from R. Joseph Saul ha-Levi Nathansohn of Lvov and the text in a single column in rabbinic type, excepting headers and initial words whioch are in square letters.

Matatron is angel accorded a special position in esoteric doctrine from the tannaitic period on. The angelology of apocalyptic literature mentions a group of angels who behold the face of their king and are called "Princes of the Countenance" (Sar ha-Panim, Ethiopic Book of Enoch, ch. 40, et al.). Once Metatron's personality takes a more definitive form in the literature, he is referred to simply as "the Prince of the Countenance." In the Babylonian Talmud Metatron is mentioned in three places only (Hag. 15a; Sanh. 38b; and Av. Zar. 3b). The first two references are important because of their connection with the polemics conducted against heretics. In Hagigah it is said that the tanna Elisha b. Avuyah saw Metatron seated and said, "perhaps there are two powers," as though indicating Metatron himself as a second deity. The Talmud explains that Metatron was given permission to be seated only because he was the heavenly scribe recording the good deeds of Israel. Apart from this, the Talmud states, it was proved to Elisha that Metatron could not be a second deity by the fact that Metatron received 60 blows with fiery rods to demonstrate that Metatron was not a god, but an angel, and could be punished. This imagery recurs frequently in different contexts in Gnostic literature and is associated with various figures of the heavenly realm. It is however thought that the appearance of Metatron to Elisha b. Avuyah led him to a belief in dualism.

The story in tractate Sanhedrin also confers on Metatron a supernatural status. He is the angel of the Lord mentioned in Exodus 23:21 of whom it is said"... and hearken unto his voice; be not rebellious against him... for My name is in him." When one of the heretics asked R. Idi why it is written in Exodus 24:1 "And unto Moses He said 'Come up unto the Lord'," instead of "Come up unto Me," the amora answered that the verse refers to Metatron "whose name is like that of his Master." When the heretic argued that, if that were so, Metatron should be worshiped as a deity, R. Idi explained that the verse "be not rebellious against) him" should be understood to mean "do not exchange) Me for him." R. Idi added that Metatron was not to be accepted in this sense even in his capacity as the heavenly messenger. Underlying these disputations is the fear that speculations about Metatron might lead to dangerous ground.

Two different traditions have been combined in the figure of Metatron. One relates to a heavenly angel who was created with the creation of the world, or even before, and makes him responsible for performing the most exalted tasks in the heavenly kingdom. This tradition continued to apply after Jahoel was identified with Metatron. According to this tradition, the new figure took over many of the specific duties of the angel Michael, an idea retained in certain sections of the Heikhalot literature up to and including the Kabbalah. The primordial Metatron is referred to as Metatron Rabba.

A different tradition associates Metatron with Enoch, who "walked with G-d" (Gen. 5:22) and who ascended to heaven and was changed from a human being into an angel - in addition he also became the great scribe who recorded men's deeds. This role was also already delegated to Enoch in the Book of Jubilees (4:23). His transmutation and ascent to heaven were discussed by the circles who followed this tradition and elaborated it. The association with Enoch can be seen particularly in the Book of Heikhalot, sometimes also called the Book of Enoch, of R. Ishmael Kohen ha-Gadol, or the Hebrew Book of Enoch (H. Odeberg's edition (see bibl.) includes an English translation and a detailed introduction). The author links the two traditions and attempts to reconcile them. But it is clear that chapters 9–13 allude to the primordial Metatron, as Odeberg points out. The absence of the second tradition in the Talmud or the most important Midrashim is evidently connected with the reluctance of the talmudists to regard Enoch in a favorable light in general, and in particular the story of his ascent to heaven, a reluctance still given prominence in the Midrash Genesis Rabbah. The Palestinian Targum (Gen. 5:24) and other Midrashim have retained allusions to Metatron in this tradition. Instead of his role of heavenly scribe, he sometimes appears as the heavenly advocate defending Israel in the celestial court. This transposition of his functions is very characteristic (Lam. R. 24; Tanh. Va-Ethannen; Num. R. 12, 15). A number of sayings of the sages, in particular in Sifrei, Parashah Ha'azinu, 338, and Gen. R. 5:2, were explained by medieval commentators as referring to Metatron on the grounds of a corrupt reading of Metraton instead of metator ("guide").

One can, thus, detect different aspects of Metatron's functions. In one place he is described as serving before the heavenly throne and ministering to its needs, while in another he appears as the servitor (na'ar, "youth") in his own special tabernacle or in the heavenly Temple. In the tannaitic period, the duty of the "prince of the world" formerly held by Michael was transferred to him (Yev. 16b). This conception of Metatron's role as the prince of the world since its creation contradicts the concept of Metatron as Enoch who was taken up to heaven only after the creation of the world.