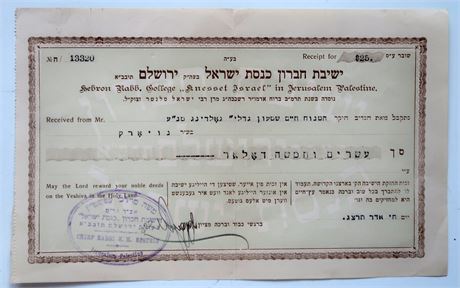 Letter by R. Moses Mordecai Epstein (1866–1933), rosh yeshivah in Lithuania and Erez Israel, was born in Bakst. He studied in his youth at the Volozhin yeshivah where he was known as the "illui ("prodigy") of Bakst." At Volozhin he supported the Hovevei Zion group, founded by students of the yeshivah and in 1891 was a member of a Hovevei Zion delegation, which bought the land for the settlement of Haderah. In 1893 he was appointed head of the Keneset Israel yeshivah of Slobodka, a position he filled until his death. In 1923 at the conference of the Agudat Israel held in Vienna, he was elected a member of the Kenesiyyah ha-Gedolah, the supreme body of the organization and the Mo'ezet Gedolei ha-Torah, its rabbinical council, established on that occasion. In 1924 he transferred most of the Keneset Israel student body to their sister yeshivah in Hebron, which he had established. After the 1929 riots in Hebron in which many of the students were killed, he moved the yeshivah to Jerusalem. His method of studying Jewish law was to seek an understanding of the structure of individual laws as a means of comprehending the system of talmudic law in general. To this end he made a special study of Maimonides, whose method of halakhic commentary he sought to elucidate. In his teaching, likewise, he stressed the understanding of the underlying principles of individual laws more than expertise in wider areas. R. Epstein's method was adopted in numerous yeshivot. A collection of his lectures, entitled Levush Mordekhai, was published in four volumes: on tractate Bava Kamma (1901); on Bava Mezia (1929); on the four parts of the Shulhan Arukh (1946); and on Yevamot and Gittin (1948).