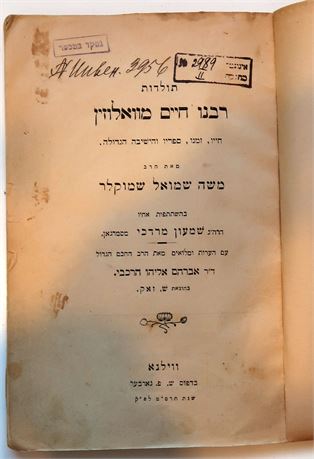 Biography of the gaon R. Hayyim ben Isaac of Volozhiner, the leading talmid of R. Elijah ben Solomon Zalman the Gaon of Vilna and of R. Aryeh Gunzberg (Sha'agat Aryeh). R. Hayyim ben Isaac of Volozhiner (1749–1821) was a rabbi and educator, leading disciple of R. Hayyim was the acknowledged spiritual leader of non-hasidic Russian Jewry of his day. R. Hayyim distinguished himself both in the theoretical and practical spheres. In 1802 he founded the renowned yeshiva of Volozhin (later to be named Ez Hayyim in his honor), which became the prototype and inspiration for the great talmudic academies of Eastern Europe of the 19th and 20th centuries, and similar schools in Israel, the United States, and elsewhere. His yeshiva transformed the whole religio-intellectual character of Lithuanian Jewry. Imbued with his educational philosophy, it raised religious scholarship in Lithuania to the unique status it was to enjoy there until the Holocaust. It attracted students from afar enhancing the dignity of their calling. Ḥayyim set high standards for admission, insisting on extreme diligence and constancy of study, and instituted in the yeshivah the system of collegial study (havruta), preferring it to self-study. The talmudic methodology, which was introduced by R. ZHayyim into the yeshiva, was that of internal criticism of texts which he had learned from the Vilna Gaon. Though humble and of pleasant disposition, R. Hayyim was fearlessly independent in his scholarly endeavors. His insistence upon "straight thinking" (iyyun yashar), as opposed to the complicated dialectics common to much of the talmudic discourse of his time, led him occasionally to disagree even with decisions of the Shulḥan Arukh, albeit with appropriate reverence. The theological framework for Hayyim's educational philosophy is contained in his posthumously published Nefesh ha-Hayyim (Vilna, 1824), which is addressed primarily to "the men of the yeshiva." Quoting widely from Kabbalistic as well as rabbinic sources. R. Hayyim elevated the study of the Torah to the highest value it had ever been accorded in Judaism. He held the hypothesized Torah to be identified with the mystical Ein Sof , and he therefore considered study of Torah as the most direct form of unmediated communion with God. In reaction to the hasidic thinkers, he defined Torah li-Shemah as study for the sake of understanding, rather than as ecstasy or mystical theurgy, regarding this as the ideal form of motivation for study. This cognitive teleology of Torah study was allied with an emphasis on the objective performance of the commandments and a corresponding devaluation of the subjective, experiential component of religious observance. In the great polemics of his day between the Hasidim and the Mitnaggedim, R. Hayyim was the acknowledged leader of the latter. He was the leading ideological spokesman for classical rabbinism, his critique of Hasidism being thorough and deliberate. Yet in the communal aspects of the controversy, he was a decided moderate. Thus, despite his enormous reverence for the Vilna Gaon (rivaling the loyalty of Hasidim to their ẓaddikim), he did not sign the ban against the Hasidim. Both these attitudes, that of theological firmness and personal mellowness, were revealed in the Nefesh ha-Hayyim, which thus became a mitnaggedic response to the dialogue begun by the hasidic teacher, R. Shneur Zalman of Lyady, and the beginning of the reconciliation of the two groups. The hasidic reaction to R. Hayyim’s critique was reflected in the pseudonymous Mezaref Avodah, published in Koenigsberg, 1858. R. Hayyim was also the author of a number of important responsa, published in Hut ha-Meshullash and Kedushat Yom Tov; Ru’aḥ Hayyim, a commentary on Mishnah Avot (and, like the Nefesh ha-Hayyim, posthumously published by his son and successor, R. Isaac); and of a number of introductions to works of the Vilna Gaon.