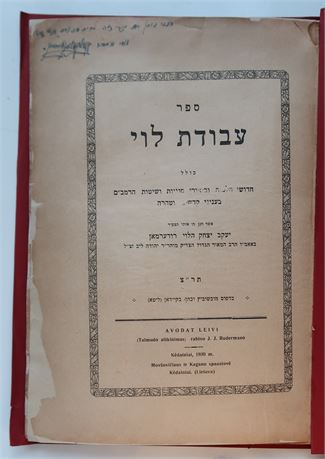 Signed dedication by the Author on title.

R. Jacob Isaac b. Judah Loeb haLevi Ruderman (1901–1987), U.S. rosh yeshivah. Ruderman was born in Dologinovo (Delhinov), Russia, and in his youth was known as the "Delhinov illui." He studied under the rabbis Moses Epstein and Nathan Ẓevi Finkel in Slobodka, and was ordained in 1926. In 1930 he arrived in the United States, and joined the faculty of the yeshivah previously established by his father-in-law, R. Sheftel Kramer, in New Haven, which soon moved to Cleveland. In 1933, Ruderman became rabbi of Congregation Tifereth Israel in Baltimore, where he organized the Ner Israel Rabbinical College. Unexpectedly, at least for outsiders, he succeeded in establishing a European-style yeshivah in the United States, one in which secular studies were not pursued but religious texts alone were studied. Under his guidance it became one of the leading yeshivot of America. In 1961 he established a branch of the yeshivah in Toronto, which was later headed by his son-in-law, R. Jacob Weinberg. Ruderman participated in the formation of Torah Umesorah in 1944, and subsequently served as chairman of its rabbinical advisory board. He also was a member of the Mo'eẓet Gedolei ha-Torah of Agudat Israel. Ruderman's novellae to Maimonides on the talmudic orders of Kodashim and Tohorot were published under the title Avodat Levi in 1930. His son-in-law became his successor.