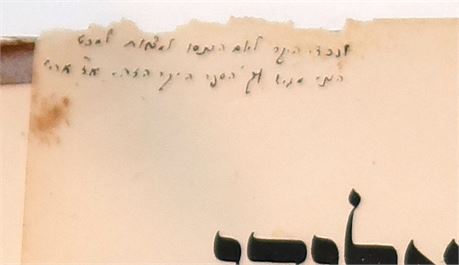 51, [1], 38 pp., quarto, 220:144 mm., wide margins, light age staining. A very good copy bound in the original boards, rubbed.
Signed by R. Aryeh Levin (affectionately referred to as “Reb Aryeh”; 1885–1969), the most saintly figure in modern Israel. Aryeh Levin was born in Orla, near Grodno, Belorussia, to poverty-stricken parents. At the age of nine he left home to study at various yeshivot, notably the Yeshiva of Slutsk, then headed by R. Isser Zalman Meltzer, and subsequently in Volozhin. He immigrated to Erez Israel in 1905, continuing his studies in the Ez Hayyim yeshiva in Jerusalem. From 1915 until his last days his official position was spiritual mentor (mashgiah) to the talmud torah attached to the Ez Hayyim yeshiva.

Although an outstanding talmudic scholar, receiving ordination from the greatest rabbis of the time, R. Hayyim Berlin, R. Samuel Salant, and R. Abraham Isaac Ha-Kohen Kook, whose faithful follower he was, and although from 1949 he conducted a yeshiva in the upper rooms of his modest home, Reb Aryeh's fame and the widespread and boundless esteem in which he was held sprang not from his learning but his good works. Humble, and living in conditions of near poverty, he devoted his life for nearly 50 years, in an entirely honorary capacity, unceasingly and without thought of self, to acts of charity and love. He appointed himself chaplain to the hospitals, especially the Leper Hospital, comforting mourners, bringing a message of love and hope to the distressed and the unfortunate, radiating benignity by the very touch of his hand.

Reb Aryeh regarded it as his special mission to attend to the needs of the Jewish political prisoners who had been incarcerated by the British Mandatory Government, particularly those who were sentenced to death, acting as a go-between between them and their families and accompanying them in their last moments. He was widely known as “the Rabbi of the Prisoners.” Reb Aryeh refused all honors, including the Freedom of Jerusalem, and never moved out of the poor quarter of Mishkenot in Jerusalem. Tens of thousands, including the most notable personalities in the country, attended his funeral.

Commentary by R. Elijah ben Solomon Zalman of Vilna (Vilna Gaon, Gra, 1720-97). The Vilna Gaon, among his many accomplishments, was his mastery of kabbalistic literature.
R. Elijah ben Solomon Zalman of Vilna (Vilna Gaon, Gra) is a dominant figure in Jewish intellectual thought, his importance and prestige undiminished, as great today, if not greater, than in his own time. The Vilna Gaon’s extraordinary intelligence, expressed by his expertise in Torah at the age of three, outdistancing his tutors while a young child, his incredible proficiency over the entire expanse of the written and Oral Torah by nine, by which time he was already studying Kabbalah, accompanied by complete piety, are attested to by numerous reputable sources. More than seventy works, encompassing Bible, halakhah, Talmud, and Kabbalah, are attributed to the Vilna Gaon.