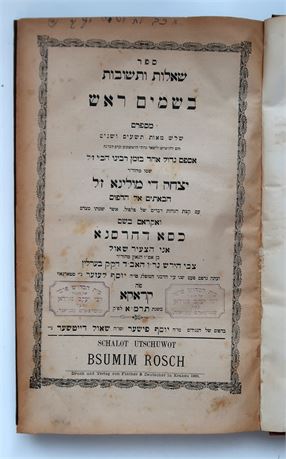 The book contains 392 responsa purporting to be by R. Asher b. Jehiel and his contemporaries: on the title page it was stated that these responsa had been collected and prepared for publication by R. Isaac di Molina. Although Berlin maintained that he had copied the book from a manuscript in Italy and that he had only added his own notes and novellae (Kassa de-Harsana), it soon became evident that the statements attributed to Asher and the other rabbis quoted were full of strange leniencies which actually bordered on antinomianism. The suspicion was soon raised that the whole book was fictitious and that its author was Berlin. The first to attack him was R. Wolf Landsberg in his pamphlet Ze'ev Yitrof (Frankfort on the Oder, 1793). After him came R. Mordecai Benet, who wrote to Berlin's father and to other rabbis. A massive rabbinical campaign then followed which branded Berlin as an atheist who sought to uproot the foundations of the Torah. Berlin's father came again to his aid, requesting the rabbis to retract their accusations against his son, and even attempting to establish the genuineness of the manuscript and R. Raphael ha-Kohen and his circle as the source of the libel. It seems that he succeeded in appeasing the rabbis, but not those scholars who held no rabbinical position.

R. Saul b. Zevi Hirsch Levin Berlin (also called Saul Hirschel; 1740–1794), German rabbi. His father was Hirschel Levin (Zevi Hirsch) and his brother, R. Solomon Hirschel. At the age of 20, he was ordained by some of the greatest rabbis of the time. In 1768 he was serving as av bet din in Frankfort on the Oder. In 1778 he wrote an approbation for Moses Mendelssohn's commentary on the Torah Biur (Be'ur; Berlin, 1783). Some time before 1782 Berlin, becoming disenchanted with what he considered antiquated rabbinical authority, retired from the rabbinate and settled in Berlin. There he joined the Haskalah group whose members, known as the Me'assefim.After the publication of Wessely's Divrei Shalom ve-Emet (Berlin, 1782), Berlin wrote a satire Ketav Yosher (published anonymously after his death, 1794), in which he sharply criticized the methods of education and the scholarship of his time as well as the customs and superstitions which had spread among the people. It also sought to dispel the rabbis' opposition to the work of Wessely. In 1784 he traveled to Italy, ostensibly to seek a cure for his rheumatism, but, quite conceivably, to meet those rabbis who had placed themselves in Wessely's camp. In Italy Berlin wrote a provocative anonymous pamphlet of objections to the Birkei Yosef of R. Hayyim Joseph David Azulai (Leghorn, 1772), to which the latter replied in his book Mahazik Berakhah (ibid., 1785). Interesting himself in manuscripts, Berlin began to edit the Or Zaru'a of Isaac b. Moses of Vienna, to which he added his own notes and novellae; these were omitted, however, from the posthumously published version in 1862. In 1789 his book Mizpeh Yokte'el appeared in Berlin under the pseudonym of Obadiah b. Baruch Ish Polonyah. It contained the most extreme criticism of the novellae to Yoreh De'ah, entitled Torat Yekuti'el, by Raphael b. Jekuthiel Susskind Kohen, rabbi of the united communities of Altona, Hamburg, and Wandsbeck. Berlin's book, in which Raphael is accused of plagiarism and of condoning corruption, stirred up a storm among the rabbis, including Berlin's own father, who placed a ban upon the book and upon its author. When the identity of the author became known, his father regretted his action and tried to protect his son. However, before the storm had subsided, another of his books, Besamim Rosh, appeared in Berlin in 1793 and touched off a new tempest. Disappointed with the controversy and its aftermath, Berlin began to wander from one country to another. According to his relative Zevi Horowitz (Kitvei ha-Ge'onim, 1928), Berlin went to London in 1794 to take up the position of rabbi of the Ashkenazi community there but died before he was able to assume the officeHis literary remains present many bibliographical problems, some of which have not yet been solved. He left critical essays which have been published in various places. He is probably the author of Ha-Orev (Vienna, 1795), attributed to R. Baruch Jeiteles.