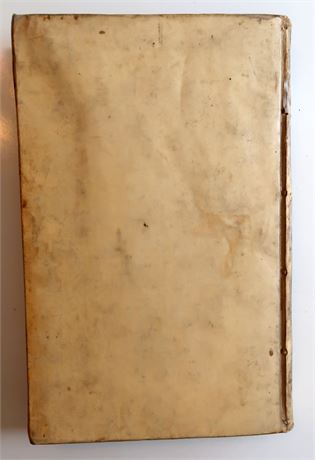 Biblical commentary by R. Solomon ibn Melekh (16th cent.). The commentary is grammatical in content, covering the entire Bible. The title page has the frames from the Decachordum Christianum, which Moses Parnas acquired from Eliezer Soncino. The text states that the book is by:

the sage Solomon ibn Melekh ס"ט (Sephardi Tohor) with the verses and words on which that sage commented according to the order of the twenty-four books (Bible) from "In the beginning" (Genesis I: I) to "the Lord his God be with him, and let him go up!" (II Chronicles 36:23), that is, the end of Chronicles, with punctuation and accents as necessary and with references to verses and comparable words, according to the order of the parshiot as sectioned by the sage, R. Mordecai Nathan, author of the book Me'ir Nativ, called Concordance in loaz (foreign languages) ....

On the verso of the title page is ibn Melekh's introduction. The text is in two columns in square letters with marginal references. At the end of the book are verses from Solomon ben Mazzal Tov and R. Abraham ben Ephraim ibn Sangi in praise of the book. Ibn Melekh explains his primary purpose in the introduction, that is, when one reads in the Torah, Prophets, or Hagiographa (Writings), in Hebrew or in loaz, he should immediately understand the simple meaning in accordance with the grammar. Secondly, ibn Melekh will comment on the rules of grammar and on words that are exceptions to the rules, on the use of letters and words that are deficient (lacking) or have additional letters, or are changed, on the קרי (Masoretic reading) and the written forms, and on disagreements in the works of grammarians. He also remarks that there is nothing in the book that is from his heart, but all is from rishonim (early sages), particularly the Radak (David Kimhi), based on the edition of the Mikhlol published by Gershom Soncino.

Mikhlol Yofi is not a large book. Nevertheless, as can be seen from the beginning and completion dates, it took almost a complete year to print. In addition to possible delays caused by the death of Parnas, a more compelling reason as to why it took so long to complete, and it is the sole title printed in 1549 in Constantinople, is that, "in printing this book, in this difficult year, even the mighty weep over their expenses ... and I found a philanthropist in the Sephardic community י"צ [may their Rock watch over them] who advanced me most of the money necessary for printing, for otherwise it would have been impossible to complete the book this year." Mikhlol Yofi was reprinted in Amsterdam (1660 and 1684) and in Vienna (1818). A reported 1567 Salonika edition is questionable.