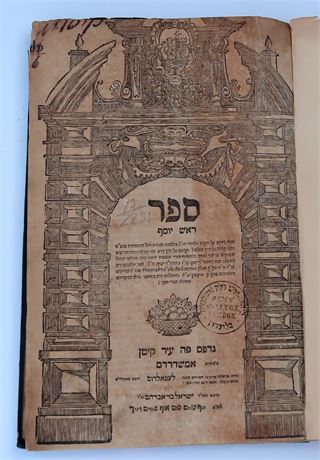 Novellae on tractates of the Talmud by R. Joseph ben Jacob. There ornate title page (see below). The text states that it is a commentary on the words of the sages, on halakhah and aggadah in the Babylonian Talmud, some in the manner of pilpul, others in the manner of derash. In it are also explained many midrashim. It is dated with the verse, “”The Lord God of your fathers” make you a thousand times so many more as you are, and bless you” (Deuteronomy 1:11). The verso of the title page has approbations signed by more than a donzen rabbis, followed by the text in two columns in rabbinic letters. There is an index at the end of the volume. Initial words of tractates are in a frame of florets and the volume concludes with an attractive tail-piece.

The title page has an architectural frame and with a crest; within the crest is an upright lion facing inward towards a tower; a star is above the lion and the tower. The lion is on the viewer's left, the tower on the right. This is the pressmark of the famed Amsterdam printer Immanuel Benveniste. The Benveniste device was used by other printers in both Amsterdam and elsewhere, including the printer of Rosh Yosef, Israel ben Abraham. This Israel was a proselyte, one who reputedly had previously been a priest, and after his conversion eschewed the sobriquets common among converts such as Avinu or the Ger. Israel ben Abraham converted to Judaism in Amsterdam, where he wrote a Yiddish-Hebrew grammar Mafte’ach Loshen ha-Kodesh (Amsterdam, 1713). After leaving Amsterdam he printed in various locations in Germany, including Koethen, Jessnitz, and Wandsbeck. Israel ben Abraham's printing-press was supported by several court Jews, including Moses Benjamin Wullf, Assur Marx, and Issachar ha-Levi Bermann (Behrend Lehmann) of Halberstadt.