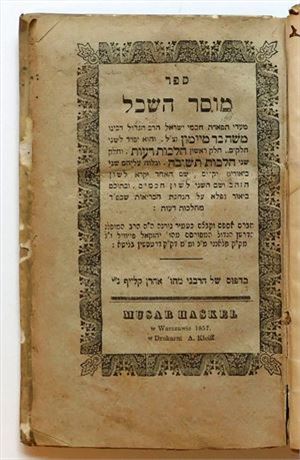 Ethical works by R. Moses ben Maimon (Maimonides, Rambam) taken from the first book of the Mishneh Torah, Sefer ha-Madda which is devoted to God and His attributes, angelic beings, the structure of the universe, prophecy, ethics, repentance, free will and providence, and the afterlife. This volume contains two parts of Sefer ha-Madda, that is, Hilkhot De’ot and Hilkhot Mussar. Hilkhot De’ot addresses, in great detail, in seven chapters, the laws and regulations of human conduct. Subject matter encompasses imitating God, loving one’s fellow man and converts, not to hate or embarrass others, be a tale bearer, or to be vengeful. Hilkhot Mussar has encompasses the requirements for true repentance. It includes the role Yom Kippur plays, the principle of reward and punishment, the world to come, Messiah, and the proper attitudes and motivations in performing mitzvot. Both are accompanied by two detailed comprehensive commentaries by R. Ezekiel Feivel Ben Ze'ev Wolf. The text of Hilkhot De’ot and Hilkhot Mussar are in the middle of the page in square unvocalized letters, the commentaries around it in rabbinic type.

Ezekiel Feivel Ben Ze'ev Wolf (1755–1833) was a Lithuanian preacher, known as the "maggid of Deretschin." He was born in Planaga, Lithuania. In his youth he was appointed preacher in his native town and, subsequently, in Deretschin. At the age of 19 he was an itinerant preacher in the Jewish communities of Galicia, Hungary, and Germany (where he remained for some time in Breslau). In Vilna he made the acquaintance of R. Elijah b. Solomon (the Gaon of Vilna) and through him, of R. Solomon Zalman of Volozhin, brother of Hayyim b. Isaac of Volozhin, who made a deep impression upon R. Ezekiel, who wrote his biography (Toledot Am, in 2 parts (Dyhernfurth, 1801–09); frequently reprinted). This contains details of R. Solomon's life and his teachings as well as stories current about him, and is a unique work for its period, reflecting the widening of the horizons of Hebrew literature in Lithuania at the end of the 18th century. R. Ezekiel sharply censures those rabbis who neglect study of the Scriptures as a result of their preoccupation with the Talmud and codes. In 1811 R. Ezekiel accepted an invitation to become the "maggid" (official preacher) of Vilna, a post in which he served until his death. Other works by Ezekiel are a commentary Be'urei Maharif (i.e., Morenu ha-Rav Ezekiel Feivel) on the Midrash Rabbah to Genesis, Exodus, and Leviticus, which was published in Vilna together with the text in 1878. A third volume of Toledot Adam remains unpublished.