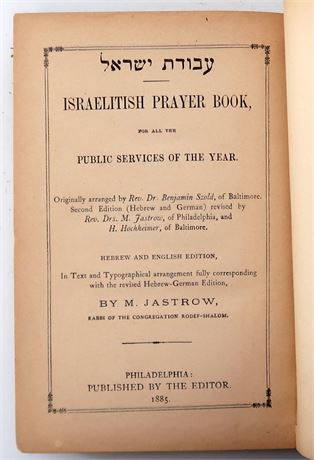 Dr. Marcus Mordecai Jastrow (1829–1903) was a Polish-born rabbi and lexicographer and a leader of the historical school in the United States. Jastrow was born in Rogasen, Poznania. He was ordained by Rabbis Feilchenfeld of Rogasen and Wolf Landau of Dresden. He also studied at Berlin University and took his doctorate at Halle with a thesis on the philosophy of Abraham ibn Ezra (1855). With the aid of Heinrich Graetz he was appointed preacher of the progressive German congregation in Warsaw. There he was caught up (with other Warsaw rabbis) in the Polish insurrectionary movement of 1861–63, preaching and writing for the revolutionary cause; he was imprisoned by the Russians for three months and, being a Prussian subject, expelled from Poland. For two years he was rabbi at Worms. In this period he published Vier Jahrhunderte aus der Geschichte der Juden (1865), covering the period from the Babylonian Exile to the Maccabees. In 1866 he emigrated to the United States as rabbi to Rodeph Shalom, a congregation in Philadelphia largely composed of German immigrants; he served this congregation until his retirement in 1892. His work with the congregation encountered many difficulties. He strove to hold his synagogue within the confines of tradition but he was not able to stem the tide to Reform. He introduced some reforms, such as the use of an organ and Benjamin Szold's prayer book Avodat Israel (Ger., 1863), which he helped to revise and which he translated into English as A Prayer Book for the Services of the Year... (1885). However, in polemics in the Hebrew Leader and the Jewish Times he opposed the movement for radical Reform as expressed by I. M. Wise, D. Einhorn, and Samuel Hirsch. He did not favor formation of the Union of American Hebrew Congregations or of Hebrew Union College. In these polemics he emerged as one of the leaders of the historical school, which developed into Conservative Judaism. Jastrow taught Jewish philosophy, history, and Bible at Maimonides College from 1867 until it closed in 1875. He took a prominent part in the work of the Jewish Publication Society, served from 1895 to 1903 as editor-in-chief of its projected Bible translation, and did the translation of Job. He also edited the Talmud section of the Jewish Encyclopedia. Jastrow was a member of the executive of the Alliance Israelite Universelle and of Mekizei Nirdamim, and served as a vice-president of the American Zionist Federation.

A severe illness in 1876 forced Jastrow to restrict his communal activities, and during a prolonged convalescence he began work on his major contribution to modern Jewish scholarship, the monumental Dictionary of the Targumim, the Talmud Babli and Yerushalmi and the Midrashic Literature (2 vols., 1886–1903; reprs. 1926, 1943, 1950; and as Hebrew-Aramaic-English Dictionary..., 2 vols., 1969). Using Jacob Levy's dictionaries and S. Kraus' Griechische und Lateinische Lehnwoerter, Jastrow produced an eminently serviceable dictionary for the student of rabbinics, particularly the English-speaking student. In comprehensiveness and in attention to comparative linguistics, the dictionary was a definite advance on its predecessors. Though talmudic lexicography has progressed considerably since the dictionary first appeared, Jastrow's work has retained its value as a tool for all who study rabbinic literature.