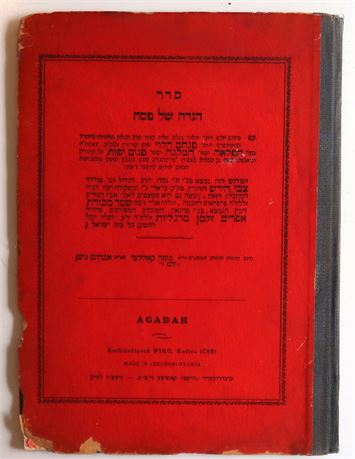 Haggadah with the commentary of R. Phinehas ha-Levi Horowitz.

R. Phinehas b. Zvi Hirsch Ha’Levi Horowitz (1730–1805), was born in Czortkow, Poland, where his father was rabbi. He studied first under his father and then under his two brothers, R. Nahum (introduction to the Shevet Ahim) and R. Samuel Shmelke Horowitz, later rabbi of Nikolsburg. During that period the two brothers were attracted to the circle of R. Dov Baer of Mezhirech and paid him visits, first in Mezhirech and then in Rovno. As a result of these visits he made the acquaintance of R. Shneur Zalman of Lyady, the founder of Chabad.

R. Horowitz was rabbi at first of Witkowo, Poland and then of Lachowicze (1764). In 1771 he accepted a call to the rabbinate of Frankfort, a post he held until his death. Horowitz was held in the highest respect by the rabbis and scholars of Frankfort, and particularly noteworthy was the cordial relationship which existed between him and R. Nathan Maas, author of the Binyan Shelomo and av bet din of Frankfort. R. Horowitz maintained a close and friendly relationship with R. Nathan Adler, although he opposed him in certain matters. His congregants also admired R. Horowitz because of his saintliness and integrity; and on one occasion he gave assistance to a Catholic priest who was in distress. R. Horowitz had a private minyan where he followed the Sephardi rite, whereas the traditional rite of Frankfort was otherwise followed.

Conspicuous among his prominent pupils was R. Moses Sofer, author of the Hatam Sofer, who revered him for his talmudic genius and his halakhic authority. He stated that despite R. Horowitz' attraction to Hasidism, he was averse to giving expression to hasidic or kabbalistic ideas. The most important of R. Horowitz' works, on which his fame chiefly rests, is the Sefer Hafla'ah, in three parts: pt. 1, Sefer Ketubbah (Offenbach, 1787), consists of halakhic and aggadic novellae on tractate Ketubbot with an appendix entitled Shevet Ahim on the Shulhan Arukh Even ha-Ezer, laws of ketubbah chapters 66–118; pt. 2, Sefer ha-Makneh (ibid., 1801), to tractate Kiddushin and to Even ha-Ezer, 26–45. Horowitz wrote a homiletical introduction to these parts entitled Pitha Ze'ira. The Hafla'ah to tractate Berakhot and on the laws of meat and milk (1895) and on various tractates (3 vols., 1900) were published posthumously. Among his other works the best known is part 3 of Sefer Hafla'ah, his commentary to the Pentateuch, Panim Yafot (Ostrog, 1824), published by R. Ephraim Zalman Margulies. In this commentary pilpulistic halakhic expositions are combined with kabbalistic and hasidic elements. He also wrote Shevet Ahim in two parts; pt. 1 Netivot le-Shabbat, a commentary to Even ha-Ezer 1–23 (1838), pt. 2 Givat Pinhas, 83 responsa (1838). A commentary to Psalms entitled Panim Yafot collected from his various works was published by Pinhas Finkelstein (1924). Various explanations by him of scriptural verses are found scattered in the works of his contemporaries and pupils. A commentary on the Passover Haggadah appeared in 1860. On the occasion of the coronation ceremonies of the emperors Leopold II and Francis II in the years 1790/92 he compiled special prayers which were issued with German translations.