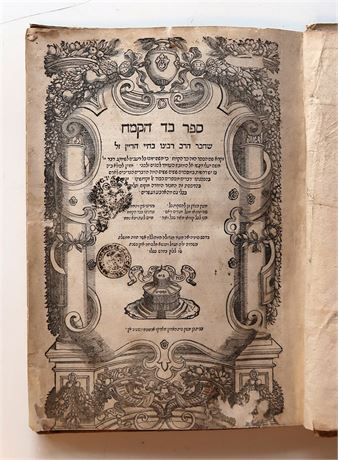 Kad ha-Kemah contains alphabetically arranged clarifications on the foundations of faith. The clarity of R. Bahya's style and his easy exposition have made this book (which draw their material from a variety of sources) highly popular with the public and has enjoyed a wide circulation. The title and final pages have the lion device of R. Judah Sassoon. The colophon informs us that the Kad ha-Kemah was completed on 18 Iyyar, 5275 (May 13, 1515).

Kad ha-Kemah consists of sixty chapters, alphabetically arranged (alphabet in not maintained witin the letter), containing discourses and dissertations on the requirements of religion and morality, as well as Jewish ritual practices. Its purpose is to promote a moral life. In it R. Bahya discusses the following subjects: belief and faith in G-d; the divine attributes and the nature of providence; the duty of loving G-d, and of walking before G-d in simplicity and humility of heart; the fear of G-d; Jewish prayer; benevolence, and the love of mankind; peace; the administration of justice, and the sacredness of the oath; the duty of respecting the property and honor of one's fellow man; the Jewish holidays, and halakha (loosely translated as "Jewish law".)

R. Bahya b. Asher b. Hlava (13th century), exegete, preacher, and kabbalist. His great commentary on the Pentateuch (Naples, 1492) was written in 1291. According to tradition, he lived in Saragossa and served there as dayyan and preacher. He was a disciple of R. Solomon b. Abraham Adret, whom he called "my master," whenever he quoted from his commentaries. Curiously enough, R. Bahya mentions neither his teacher's kabbalistic sayings nor his commentaries on the mystical teachings of Nahmanides as did R. Solomon b. Adret's other disciples. There are also kabbalistic matters quoted anonymously by Bahya which are attributed to R. Solomon b. Adret by other authors.

Marco Antonio Giustiniani was a Christian printer of Hebrew books in Venice in the 16th century. His master printer Cornelius Adelkind printed a fine edition of the Babylonian Talmud (1546–51). Soon, this very active press faced a formidable competitor in the house of Bragadini which issued Maimonides' Mishneh Torah, with the notes of R. Meir Katzenellenbogen. Giustiniani then printed the full text of that code without R. Meir's notes. The mutual recriminations that the rivals engaged in at the Papal Court ultimately resulted in the confiscation and burning of all Hebrew books (1553).