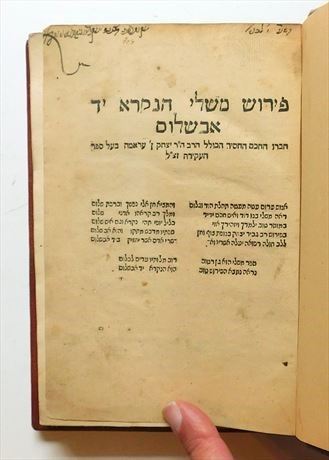 Commentary on Proverbs by the renowned R. Isaac ben Moses Arama (Akedat Yizhak). There is both a preface and introduction prior to the text. R. Arama dedicated Yad Avshalom to the memory of his son-in-law. R. Isaac ben Moses Arama, (c. 1420–1494), Spanish rabbi, philosopher, and preacher. As a young man Arama taught at Zamora and subsequently served the small communities of Tarragona and Fraga in Aragon. He was later appointed rabbi of Calatayud, where he wrote most of his works. In order to counteract the effects of conversionist sermons to which the Jews of Aragon were compelled to listen, Arama delivered sermons on the principles of Judaism. These sermons became the basis of his later works and contain interesting data on the history of the Jews in Spain prior to their expulsion. Arama engaged in several public disputations with Christian scholars. After the expulsion of the Jews from Spain, in 1492 Arama settled in Naples where he died. Arama is best known as the author of Akedat Yizhak ("Binding of Isaac") which exercised great influence on Jewish thought. Written in the form of philosophical homilies and allegorical commentaries on the Pentateuch, the work consists of 105 "Portals." Each portal forms a complete sermon which is divided into two parts: derishah ("investigation"), and perishah ("exposition"). In the derishah, the author examines a philosophical idea in the light of his chosen texts, biblical and rabbinic, with which the sermon opens. In the perishah, the Scriptural commentary predominates and the difficulties which seem to appear in the text are solved with the aid of the central idea of the derishah. Thus, the gap between the two parts of the sermon is skillfully closed, and they merge into one harmonious whole. First published in Salonika in 1522, the Akedah has since been reprinted many times. Among Arama's other works are: Hazut Kashah ("Grievous Vision"; Sabbionetta, 1552), a polemic dealing with the relation of philosophy and religion; a commentary on the Five Scrolls (Riva di Trento, 1561. It should be noted that the commentary on Esther, extant in all editions of Akedat Yizhak since Venice, 1573, is actually the work of his son Meir Arama. Isaac's own commentary on Esther was published in Constantinople, 1518. He also wrote several poems and a commentary on Aristotle's Ethics, apparently lost. Although Arama composed his works in the form of philosophical homilies and commentaries on Scripture rather than as systematic treatises, he nevertheless integrated within this literary framework a treatment of the then-current major philosophical problems: the relation between Scripture and philosophy; faith and reason; the allegorical method; articles of faith; creation and structure of the world; miracles; providence; immortality of the soul; man's free will and God's foreknowledge; prophecy; ethics. Considering the relation of Scripture and philosophy, Arama seeks to demonstrate the superiority of divine truth over human reasoning, and the necessity of subordinating reason to Scripture whenever the two are in conflict. He brings into sharp relief the distinction between religion and philosophy by illustrating the difference between their respective conceptions of God. Discussing the problem of faith and reason, Arama criticizes Maimonides' rationalistic definition of faith, according to which faith is subordinated to reason. Arama describes faith as the voluntary assent to the teachings of Scripture in spite of intellectual uncertainty about them, and he cites the patriarch Abraham's willingness to sacrifice Isaac as an example of this kind of faith. In his interpretation of Scripture, Arama uses the allegorical method, quoting in justification the Zohar's statement that Scripture should not be read literally. In opposition, however, to the extreme allegorical commentators among the philosophers, he emphasizes that the allegorical interpretation of Scripture should not deny its literal meaning. Arama analyzes and criticizes the lists of articles of faith drawn up by Maimonides, Crescas, and Albo, and he presents six of his own. They are: creation, miracles, revelation, providence, repentance, and immortality of the soul. Each of these, according to him, is embodied in a specific Mosaic law. In the case of miracles, Arama maintains that God possesses the power to suspend the laws of nature and perform miracles whenever necessary. He does not hesitate, however, to offer rational explanations of some of the miracles recorded in Scripture, maintaining that man was originally endowed with power over nature and was granted the means of establishing "cosmic harmony." He affirms man's freedom of will and discusses in great detail the nature and history of the problem of man's freedom and God's foreknowledge. He is critical of those philosophers who attempted to escape the dilemma by sacrificing either Divine omniscience or human freedom. He emphasizes that grace must be merited and criticizes the Christian doctrine that grace is given freely by God, a doctrine which, according to him, amounts to a denial of free will. In his treatment of ethics, Arama tries to prove that the laws of Moses are the natural laws of the philosophers; that they are to be identified with the moral and intellectual virtues; that they contain additional virtues not mentioned in any of the lists drawn up by the philosophers; and that they lead to the happiness in which the philosophers find the highest good of man. This happiness consists in a spiritual life in this world and an eternal life in the world to come.