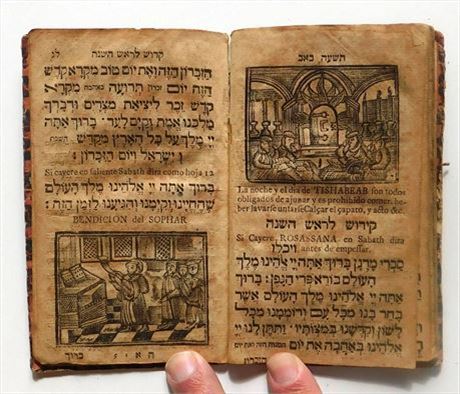 Rare. Published for the Converso community in Amsterdam.

Compilation of customs and liturgies in Hebrew and Spanish. The work includes the Haggadah, Grace after Meals, Blessing for the new moon, evening prayers and more.

The majority of Spain's Jews converted to Christianity as a result of the pogroms in 1391. Conversos who did not fully or genuinely embrace Catholicism, but continued to practise Judaism in secrecy, were referred to as judaizantes ("Judaizers") and pejoratively as marranos ("swine"). Conversas played a pivotal role in keeping Jewish traditions alive by observing many Jewish holidays like Shabbat. Conversas also cooked and baked traditional Jewish dishes in honour of the Sabbath (starting on Friday sundown), Yom Kippur, and other religious holidays. During festivals like Sukkot and Passover, Conversas participated by giving clothing articles and ornaments to Jewish women, they also attended a seder or obtained a baking matzah. Conversas also ensured that their household maintained similar dietary regulations as their Jewish counterparts, they did so by eating only kosher birds and other animals. Conversas also financially contributed to the growth of the Jewish/Converso community and synagogue. The Jewish community and the conversos exchanged books and knowledge, Jews taught conversos how to read to ensure a constant growth of their Jewish heritage. To take a stance against the church and its principles, some conversos performed professional work even on Sundays. The traditional Jewish Purim was kept by the conversos in disguise of a Christian holiday, they named it: "Festival of Santa Esterica".