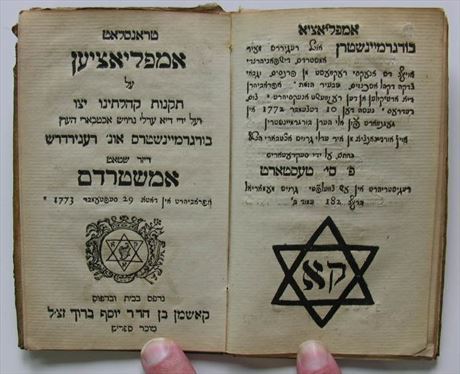 Regulations concerning payment of taxes by the Ashkenazic community in Amsterdam. The first Ashkenazi settlers in Amsterdam arrived in the 1620s. At first they depended socially and economically on the Sephardi community, but were in the same position as to legal status. In 1636 they began to hold their own services and appointed as their rabbi R. Moses b. Jacob Weile of Prague. Their first synagogue was acquired in 1640. The number of Ashkenazi Jews rapidly increased and soon exceeded the Sephardi community. Jews from Poland found their way to Amsterdam after the Chmielnicki massacres in 1648–49, and after the Swedish invasion in 1655. The Polish Jews founded their own congregation in 1660, which maintained ties with the Council of the Four Lands. In 1673, after lengthy negotiations and intervention by the municipal authorities, they were finally forced to join the main Ashkenazi body, then numbering 7,500 members. In 1671 a large and luxurious synagogue was built, and to meet the needs of the growing population, additional Ashkenazi synagogues were built in 1686, 1700, and 1730. Prominent Ashkenazi rabbis included R. David b. Aryeh Leib of Lida (appointed 1680), R. Eleazar b. Samuel of Brody (appointed 1735), and R. Zevi Hirsch b. Jacob Ashkenazi ("Hakham Zevi"), appointed in 1710 but forced to resign later. However, down to 1815 a number of his descendants were Ashkenazi chief rabbis of Amsterdam (his son-in-law R. Aryeh Leib Loewenstamm, (1740–55), his grandson R. Saul Loewenstamm (1755–90), and R. Saul's son R. Moses (1790–1815)).