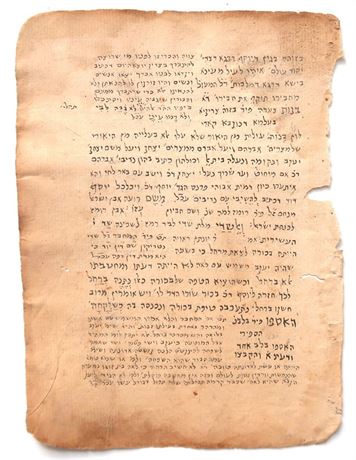 Manuscript page from his work Hemdat Yamim by R. Shalem b. Joseph Shabazi (Shabbezi, Salim al-Shibz; 1619 - 1695?) the greatest of Yemenite Jewish poets. Some 550 of his poems and hymns are extant, written in Hebrew, Aramaic, or Arabic. In all of them, his name appears in acrostic form either at the beginning of the stanzas or in the poem itself. No details are known regarding his life except what can be deduced from his poems. Living in a period of persecutions and messianic anticipations for Yemenite Jewry, Shabazi gave faithful poetic expression to the suffering and yearning of his generation, whose national poet he became. It seems that he wandered in poverty throughout Yemen. Many legends describe him as a zaddik and miracle worker; his tomb in Taiz was considered holy and became a shrine where both Jews and Muslims prayed for relief from sickness and misery. His poetry deals primarily with the religious themes of exile and redemption, the Jewish people and God, wisdom and ethics, Torah, and the life to come. Many of his poems deal with the glorious past of the Jews in their own land, from which the author draws faith and hope for renewed greatness in the future. He wrote poems dedicated to the Sabbath and festivals, marriage, and circumcision. His ethical poems are outstanding for their teaching and gentle moralizing. Kabbalah and mysticism based on the works of the kabbalists who preceded R. Isaac Luria play an important role in his poetry. Academic and medieval scientific themes are also a frequent feature. His rare secular poems deal with discussions between concrete and abstract objects. His poems are not confined to any one theme, but combine several subjects in one and the same work. Their style, comparable to that of rabbinical literature, is prosaic and easy, making his poetry readily accessible to the masses. About half the poems in the Yemenite diwan, published in many editions, are by him.