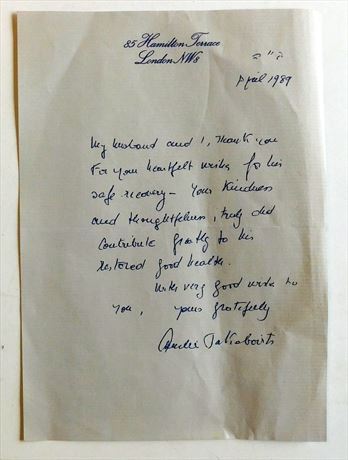 Letter by Lady Amélie Jakobovits wife of Chief Rabbi Immanuel Jakobovits. (8 February 1921 – 31 October 1999) was the Chief Rabbi of the United Hebrew Congregations of the Commonwealth from 1967 to 1991.

R. Jakobovits (named after Emanuel Kant) was born in Königsberg, East Prussia, Germany (now Kaliningrad, Russia), where his father Julius (Yoel) was a community rabbi. The family moved to Berlin in the 1920s, where his father became rabbinical judge on the Beth Din of the Grossgemeinde, but fled the country in 1938 in time to escape Nazi persecutions. In the United Kingdom he completed his higher education, including a period at the Etz Chaim Yeshiva in London, studying under and receiving semicha from the renowned Rabbis Elya Lopian, Leib Gurwicz and Nachman Shlomo Greenspan. He also studied in Jews' College and the University of London.

He married Amélie Munk of Paris, the daughter of a prominent rabbi, who would support his community work throughout his life. They had six children. Lady Jakobovits died in May 2010, and was buried alongside her husband, on Jerusalem's Mount of Olives.

His first position was as rabbi of the Brondesbury synagogue. In 1949, at the relatively young age of 27, he was appointed Chief Rabbi of the declining Jewish community of Ireland. This was to be a stepping stone towards a greater rabbinical career, and in 1958 he assumed the rabbinate of Hermann Merkin's Fifth Avenue Synagogue in New York, a position he held until 1966, when he was called to the Chief Rabbinate of the United Hebrew Congregation of the British Commonwealth. He held this position until his retirement in 1991.

He was knighted on 22 July 1981 and was created a life peer in 1988, as Baron Jakobovits, of Regent's Park in Greater London, becoming the first rabbi to receive this honour. In 1987 he was given a Lambeth DD by the Archbishop of Canterbury, the first Jew to receive such a degree. In 1991 he received the Templeton Prize for Progress in Religion.

In the House of Lords he became known as a campaigner for traditional morality. Lord Jakobovits aroused considerable controversy when, after the discovery of a possible genetic explanation for homosexuality, he suggested that he saw no "moral objection for using genetic engineering to limit this particular trend". While he did not advocate abortion, he did describe homosexuality as "a grave departure from the natural norm which we are charged to overcome like any other affliction"; if there were genetic explanations for homosexuality, "the errant gene" should be "removed or repaired" in order to prevent the "disability".

Lord Jakobovits died of a cerebral haemorrhage on the 31 October 1999, and was buried on the Mount of Olives in Jerusalem.