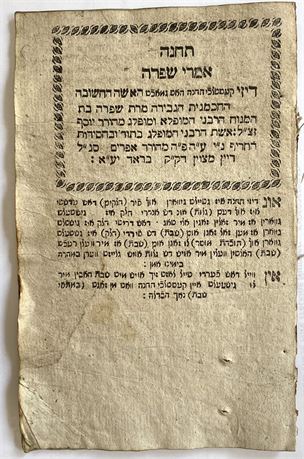 Not in Major Collections or NLI (NLI copy is of later vintage and assigns the city of Posen as R. Joseph's place of practice.)

Liturgy in Yiddish for men and women to recite throughout the year at various occasions for Heavenly intervention. The general category of Tehinnah (Tehinnot) are a form of piyyutin which originated in the tahanun prayer for the fasts of Monday and Thursday. The term was also transferred to piyyutim for the selihot days, and indeed both the construction and subject of the tehinnah are similar to selihot. The tehinnah is usually said quietly, its subject being the relationship between G-d and the people of Israel. It is sometimes constructed in rhymed verses, sometimes in rhymed rhetoric, or even un-rhymed, in the style of a bakkashah. In addition to Hebrew tehinnot, there were Yiddish-German ones for women published in small brochures from the beginning of the 18th century in Bohemia (Prague), Switzerland (Basle), Germany (Sulzbach, Fuerth, Roedelheim), and many towns of Russia and Poland. Occasionally tehinnot were added as appendixes to editions of the prayer book.