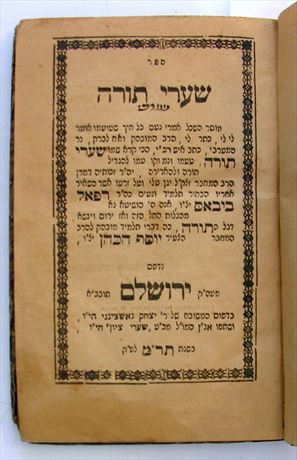 Five ethical discourses by R. Jacob Bibas (d. 1876). The initial discourse concerns itself with those "bad" individuals who speak ill of the rabbinate. The second deals with talking during the rabbi's speech, etc.The Author expresses shock at the rabbis for allowing the practice of derailing scholars to continue.

R. Bibis was born and educated in Tetuan, Morocco. He served in the Sephardic Bet Din in Jerusalem for many years. He is buried on the Har haZeitim.

The printer, Israel b. Abraham Bak (1797–1874) was born in Berdichev, Ukraine, into a family of printers. Later he owned a Jewish press in Berdichev, printing about 30 books between 1815 and 1821 when the press closed down. In 1831, after various unsuccessful efforts to reopen the works, he emigrated to Palestine and settled in Safed. There he renewed the tradition of printing Hebrew works, which had come to an end in the last third of the 17th century. During the peasant revolt against Muhammad Ali in 1834 his printing press was destroyed and he was wounded. Later he reopened his press, and also began to work the land on Mount Yarmak (Meron), overlooking Safed. His was the first Jewish farm in Erez Israel in modern times. After the Safed earthquake in 1837 and the Druze revolt in 1838, during which his farm and printing press were destroyed, he moved to Jerusalem. In 1841 he established the first - and for 22 years, the only - Jewish printing press in Jerusalem. One hundred and thirty books were printed on it, making it an important cultural factor in Jerusalem. Bak also published and edited the second Hebrew newspaper in Erez Israel, Havazzelet (1863). After a short time its publication stopped and was renewed only in 1870 by his son-in-law I. D. Frumkin and others. Israel Bak was a leader of the hasidic community; as a result of his efforts and those of his son Nisan, a central synagogue for the Hasidim, called Tiferet Israel (after R. Israel of Ruzhin), came into being. In Jerusalem it was also known as "Nisan Bak's synagogue." It was destroyed in 1948 during the War of Independence.