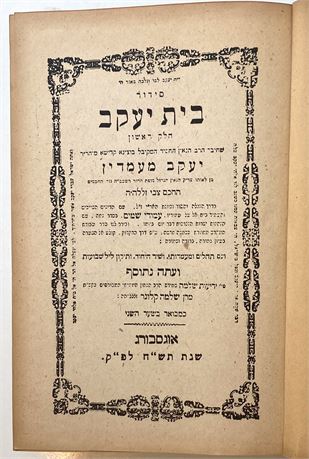 Reprint of the popular Emdin Siddur following the Ashkenaz custom. Printed by and for the use of Holocaust survivors in liberation camps. They volume is dedicated to the memory of several Lodz martyrs, victims of the Nazis.

R. Jacob Emdin (pen name Yavez; derived from Ya'akov Ben Zevi; 1697–1776), rabbi, halakhic authority, kabbalist, and anti-Shabbatean polemicist. Emden was regarded as one of the outstanding scholars of his generation. Emden's teacher was his father R. Zevi Hirsch Ashkenazi (Hakham Zevi). He inherited his father's interest in secular studies, his dissociation from the Ashkenazi method of study (pilpul) and customs, his stormy, independent, and uncompromising character, and his devotion to the campaign against the Shabbateans and their sympathizers. In addition, he possessed a fine literary talent, a critical tendency and a knowledge unusual for his age of general non-halakhic Jewish literature. He was also familiar with sciences and languages (German, Dutch, Latin). Despite his distinguished descent and his remarkable talmudic attainments, R. Emden occupied no official position, with the exception of a few years as rabbi of Emden (1728–1733). This made it possible for him to be exceptionally critical toward the society and the tradition of his time. He was more on guard about anything that he considered hillul ha-Shem (bringing the name of the Jew into disrepute) than for the good name of the rabbinate and of the community. He made extensive use of the private printing press he founded in Altona to disseminate his views. As a result, because of his views on a number of issues, both personal and communal, he became a figure widely respected, feared, and contentious.

His main historical importance lies in his campaigns against the Shabbateans to which he dedicated many years. He relentlessly examined and investigated every suspicious phenomenon pertaining to the sect. He called upon the contemporary rabbis to publish excommunications and mercilessly attacked anyone suspected of supporting or showing sympathy to the Shabbateans. The Shabbateans were accustomed to introduce hints of their secret doctrine into their literary works, particularly in the field of Kabbalah. Consequently, R. Emden became an expert in uncovering such allusions and hidden meanings, and developed an extraordinarily sharp critical faculty by which he could recognize any suggestion of the Shabbatean heresy. Many books in which no one saw anything to which objection could be taken, were condemned by him as heretical. Though at times he was at fault and suspected the innocent without cause, his judgment in general was sound.