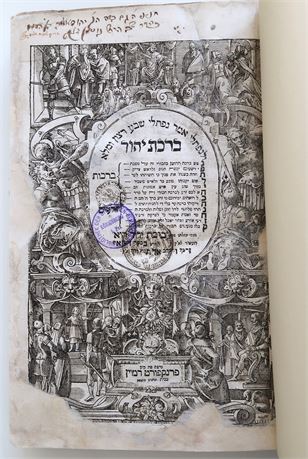 Hadran and introduction to the Talmud connecting the close and opening of each tractate and Kedushah u-Verakhah, novellae to the tractate Berakhot.

R. Naphtali b. Isaac ha-Kohen (Katz) (1645–1719), rabbi and kabbalist. R. Naphtali was born in Stepan (Volhynia), where his father was rabbi. In his youth he was taken captive by the Tatars but managed to escape. He succeeded his father as av bet din of Stepan and then served as rabbi of Ostrow (1680–89), Posen (1690–1704), and Frankfort on the Main (1704–11). In the latter year a fire broke out in his house, destroying the whole Jewish quarter of Frankfort. After he had been maliciously charged with preventing the extinguishing of the fire because he wanted to test his amulets - in the use of which he was expert - he was imprisoned and compelled to resign his post. He went to Prague, staying in the house of David Oppenheim, where he met Nehemiah Hayon and even gave approbation to his book Oz le-Elohim (also called Meheimnuta de-Kalla; Berlin, 1713). From 1713 to 1715 he lived in Breslau, where together with R. Zevi Hirsch Ashkenazi he excommunicated Hayon after realizing his true character. In 1715, after King Augustus of Poland had rejected his application to be restored to his post as rabbi of Posen, he returned to Ostrow where his son Bezalel was rabbi. While journeying to Erez Israel he was taken ill in Constantinople and passed on there.

Among his works are Pi Yesharim (Frankfort, 1702), kabbalistic comments to the word bereshit ("in the beginning"); and Sha'ar Naftali, poems and piyyutim (Bruenn, 1757). Several works are still in manuscript. R. Naphtali was one of the important halakhic authorities of his generation and one of the greatest kabbalists of Poland. His image persisted in the memory of the people, and many legends and wondrous tales about him circulated for many generations. He conducted his rabbinate high-handedly and as a result met much opposition from the leaders of the communities, which was apparently the cause of his frequent wanderings. Despite this he had a sensitive soul which found expression in his poems, piyyutim, and prayers which have been published in various places. His well-known ethical will (Berlin 1729) contains profound thoughts and moral instruction and some see in it one of the first sparks of practical Hasidism.