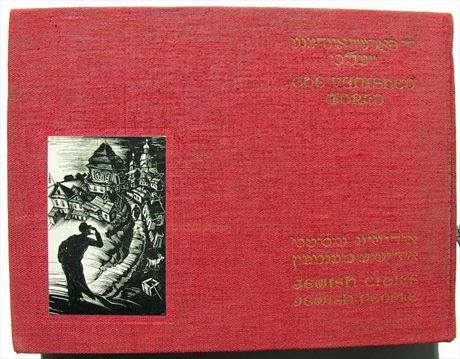 Photographs By Roman Vishniac, A. Kacyzna, M. Kipnis, Others.

First edition of this evocative glimpse into the world of Eastern European Jews, with 530 black-and-white photogravures, including over 145 images by photojournalist Roman Vishniac that capture “the heart of Jewish life” (New York Times).

“Following WWII, as the full horror of the Holocaust became known, Jewish organizations published photobooks, both to record what the Nazis had done and to give a sense of what had been lost. The Vanished World, published by the Forward Association in New York, is a collection of documentary photographs recording the Eastern European Jewish communities that the Nazis (and others, let it be said), tried so systematically to eradicate… Divided into two sections, one showing life in the city and shtetl, the other concentrating on the people themselves… The Vanished World is a superb, if forlorn, collection” (Parr & Badger II:214). This exceptional photobook of 530 photogravures, accompanied by text in Yiddish and English, includes over 145 images by renowned photographer Roman Vishniac, whose travels across Eastern Europe produced images that quietly “penetrate to the heart of Jewish life… which history has made tragically remote” (New York Times).

Additional photographs from Alter Kacyzne, who was murdered by Nazi sympathizers in 1941, and Menahem Kipnis, noted Yiddish folklorist. Edited by Raphael Abramovitch, who became a chief contributor to the Jewish Daily Forward after his escape to America in 1940 (Encyclopaedia Judaica). With three tipped-in full-page maps, highlighted in red, of Eastern Europe and Warsaw. As issued without dust jacket. From the library of Daniel Berley, long associated with New York’s prestigious Lee Witkin Gallery, whose 1969 opening ushered in “the modern era of photographic collecting” (Parr & Badger II:11).