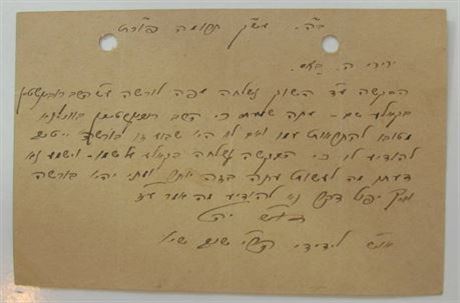 Letter by R. Yehuda Leib Chasman (1869-1935), known in the world of Yeshivas and in the Musar circles as "Reb Leibchik Stutshinger", because he had been the Rabbi of Shtutshin for a long time. He was well known among in the Yeshiva world and in "Musarnik" circles, established by the Gaon, R. Israel Salanter and his spiritual successor, R.Simcha Zissel Ziev from Kelm. R. Leib was one of the first and most outstanding students at the "Talmud Torah" in Kelm. He drew inspiration from R. Zissel at a time when the study of Mussar was not yet common in Yeshiva circles. Later, he was the most original representative of the Kelmian Mussar system and succeeded his teacher in his later years when he was appointed spiritual director of the magnificent Telz Yeshiva. He was later at his own independent Yeshiva, which he established in Shtutshin, the town of his Rabbinate. In his last years, he was the spiritual director of the Slabodka Yeshiva in Hebron and in Jerusalem.

R. Yehuda Leib Chasman was also a perfect man of action who preached the principle of "practice what you preach" in his popular articles and conversations. As a spiritual leader in Telz and in Shtutshin, he was forceful in his opinion. He managed his leadership at a high level. He passed regulations regarding the study of Musar, the correction of principles, and the suppression of impulses. This was done on the basis of the above-mentioned R. Simcha Zissel's methods. His teacher and Rabbi, the Gaon, R. Yitschak Blazer, who was known as “Reb Idel Petersburger”, especially influenced him. A very little of the thoughts and inspiration of Rabbi Leib-chik, (the spiritual leader and the man of ethics), can be found in his book "Or Yahel" (two volumes - 1938 and 1951), which was published in Jerusalem after his death.

R.Leib Chasman also had a reputation as a leader in the Torah and as a many-sided activist in the fields of general religious political circles. As a young man, he was one of the best students at the renowned Lithuanian Yeshivas. He was one of the outstanding students of the "Netsiv" of Volozhin as well as that of the R. Chaim Halevi Soloveichik of Brisk. He also studied as a "tent-dweller" (sedentary position) in his town of birth, Ibaye in Vilna province. Here, he was under the tutelage of the Gaonim R. Chaim Ozeir Grodzanski of Vilna and R. Aaron Baksht, the head of the Beit Din of Shadowa, Sowalk Lomzha, and Shawli.

R. Leib Chasman established the independent Yeshiva in Shtutshin in 1908. This was a new Yeshiva, called "Anaf Knesset Yisrael" ("Branch of Israel Congregation"). Many students flowed there, from far and near, including many veteran Yeshiva students. About three hundred excellent students studied at Shtutshin Yeshiva before World War One, and it was well thought of throughout Lithuania and Russia. The young head of the Rabbinical College, the young Gaon R. Alter Shmuelowitz, was also well known. However, Shtutshin Yeshiva did not last for more than a few years only, because, during World War One, most of the students dispersed to their hometowns. (Some of them transferred to a Torah Kibbutz in Grodno. They formed the foundation of the "Shaarei Torah" Yeshiva of the Gaon, R.Shimon Shkop of Telz, who later taught in Briansk, and moved from there to Grodno.) R. Leib Chasman himself went into exile with his family to Central Russia. When he returned to Shtutshin in 1921, he did not reestablish the Shtutshin Yeshiva.

From then on, R. Leib Chasman dedicated himself to general communal-Torah activities: He was right-hand-man to the "Chafeitz Chaim" and of R. Chaim Ozeir Grodzanski in their rehabilitation of their old Yeshivas. He was especially involved in organizing the "Yeshiva Committee" in Vilna, and the establishment of the ultra-orthodox weekly "Das Wort". In 1926, the management of the Slabodka Yeshiva in Hebron invited R. Leib Chasman to be the spiritual leader at this large and luxurious Yeshiva in the Holy Land. The Shtutshin Rabbinate was given, on his recommendation, to the Gaon R. Yechiel-Michal Rabinowitz from Baranowitz, the author of "Afikei Yam".

R.Leib Chasman worked for nearly ten years in Hebron and Jerusalem. Despite his declining health in those years, he was like a fountainhead in his deep spiritual influence on his thousands of students and listeners. During the Hebron riots in 1929, he displayed great spiritual courage and was amongst the first to treat the wounded personally. When the Yeshiva was transferred to Jerusalem, he became a central figure in the Jerusalem Ultra-Orthodox community. He served for a few years as the president of the Diskin Orphanage in place of Rabbi Zonnenfeld. Until his last days, (he died on 11th Heshvan in 1935), he did not stop teaching Torah and Ethics. Thousands attended his funeral; and he was laid to rest in the Mount-of-Olives Cemetery. R. Leib Chasman left behind important essays in Ethics, Interpretations, Jewish Law. His conversations on Ethics were published, as aforementioned, by a public committee of his outstanding students, under the name of "Or Yaheil" (two volumes). His essay on Jewish Law, "Machane Yehuda" was published in 1965 by his only son, Reb Raphael Chasman.