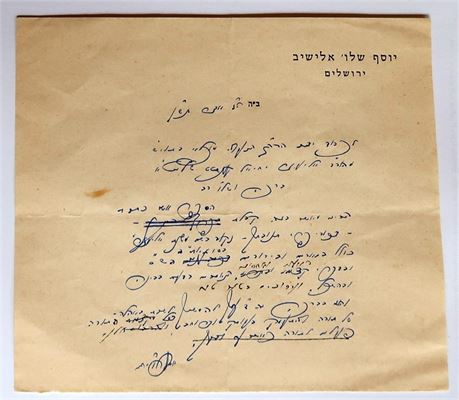 Letter by R. Yosef Shalom Elyashiv (1910 – 2012), Haredi rabbi and posek (arbiter of Jewish law) who lived in Jerusalem. Until his death at the age of 102, R. Elyashiv was the paramount leader Lithuanian-Haredi community, and many Ashkenazi Jews regarded him as the posek ha-dor, the contemporary leading authority on halakha, or Jewish law.

He spent most of his days engaged in Talmudical study, and delivered lectures in Talmud and Shulkhan Arukh at a local synagogue in the Meah Shearim area in Jerusalem where he lived. He received supplicants from all over the world and answered the most complex Halakhic inquiries