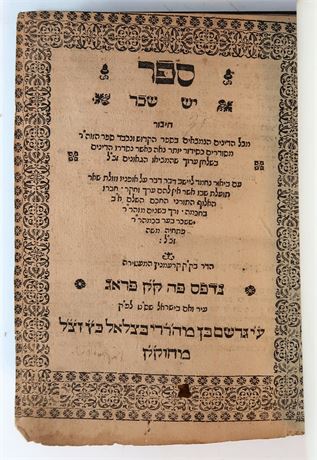 Halakhic code based on the Zohar by the renowned kabbalist R. Issachar Baer ben Pethahiah Moses of Kremnitz, Hungary (d. before 1648, see above, Pethai Yah, 1609). The title page states that in it are, “All the laws found in the holy Zohar arranged in an order most pleasant, the laws arranged as in the Shulhan Arukh by the geonim. With a pleasing explanation, resolutions with, “a word fitly spoken” (Proverbs 25:11), in addition to other benefits, beyond value . . .” Issachar’s introduction is on the verso of the title page. He writes that his spirit was within him, “‘as I was in the days of my youth’ (Job 29:4), my mouth and heart were one, to seek G-dly wisdom.” It was good in his eyes to wage the wars of Torah. He sought to write this work with the laws in the Zohar with an explanation, pleasing, “and the light is sweet, and pleasant for the eyes to behold” (cf. Ecclesiastes 11:7). The considerable expense of publication has prevented him from publishing at this time his larger explanation of Kabbalah entitled (Yodei Binah). He has called this work, Yesh Sakhar (“there is a reward” Jeremiah 31:15, II Chronicles 16:7) for most certainly there is a reward for all who fulfill them, for they are an inheritance to his beloved, 310 (יש yesh) worlds, as it says, “That I may cause those who love me to inherit wealth יש” (Proverbs 8:21).

R. Issachar informs that all references to the Zohar are to the Cremona edition, the most complete, more so than the small Venice edition, despite it being replete with errors without number. It is also more readily found. Halakhot not applicable are omitted. The text follows, comprised of the halakhot from the Zohar in the inner column, Issachar’s explanation in the outer column. Yesh Sakhar follows the order of the Shulhan Arukh, beginning with rising in the morning, prayers, conduct at the table and benedictions, Shabbat, festivals, shehitah, niddah, Talmud Torah, charity, milah, the requirement to marry and bear children, and marital laws, including betrothal, divorce, levirate marriage and halizah. Issachar stresses fulfilling them with exactitude, according to the added emphasis of the Zohar over the Shulhan Arukh, both for its stringency and for its clarification of the reasons for the mizvot. An example of Issachar’s commentary is on the Zohar’s requirement that the host cut the bread, even if the guest is of greater stature. He explains that the host will be more generous, which is necessary, for if not so the intent is considered faulty, the purpose being to arouse the Host above to provide supernal abundance. The volume concludes with errata.

Little is known about R. Issachar, who was an uncle of R. David Lida (c. 1650-96). The latter refers to R. Issachar in Sod HaShem. R. Issachar was the recipient of the last and most important of the three letters sent by R. Solomon (Shlomel) Dresnitz from Safed concerning R. Isaac Luria (ha-Ari), requesting that the recipient copy and distribute it, a request fulfilled by Issachar. Despite the high regard for Issachar by other kabbalists his adherence to Cordoverian kabbalah limited the popularity of his books, given the more widespread and influential Lurianic kabbalah. His other works are Pethei Yah (Prague, 1609), an introductory work on the fundamentals of Cordoverian Kabbalah, Imrei Binah (1610, see below for these works) and Mekor Hokhmah (1611) on different aspects of Kabbalah. A larger work on the Zohar, Yodei Binah, was never published.