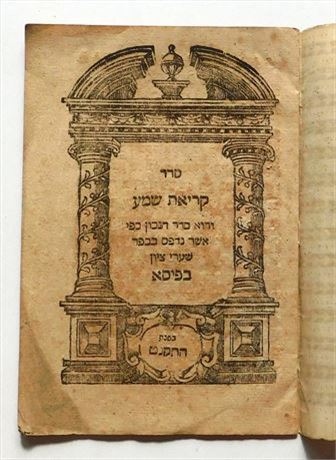 6, [2] ff., octavo, 173:115 mm.., wide margins, usual light age, and damp staining. A very good copy bound in the original wrappers.
Very rare. A special prayer for pregnant women to be recited with the Shema on the final f.

Kriyas Shema Sh'Al Hamita in a pocket size booklet.  Keri'at Shema al ha-Mittah; (the reading of the Shema on retiring, on the bed), a prayer recited before retiring for the night. The custom to pray before going to sleep reflects man's need for protection in a state of suspended consciousness and vulnerability, especially since sleep was held in ancient times to be similar to death. Possibly practiced earlier, the Night Prayer in which one commends one's soul to G-d for the night became obligatory only in mishnaic times. It was incorporated into the prayer book of nearly all Jewish communities in an almost identical form (but see below): When Arvit became established as a community prayer to be recited in the early evening, the Night Prayer became the individual concluding prayer of the day. The name Keri'at Shema al ha-Mittah refers to the central part of the prayer which is the first paragraph of the Shema. The Talmud states that he who wishes to go to sleep should say the Shema until the words Ve-hayah im shamo'a and recite the prayer Ha-Mappil to G-d "Who causes the bands of sleep to fall upon my eyes..." (Ber. 60b). Some codifiers demand the recitation of the first two sections of the Shema (see R. Asher to Ber. 9 no. 23); the majority, however, require the first one only (Maim. Yad, Tefillah, 7:1–2; Tur and Sh. Ar., OH 239:1), to be preceded by Ha-Mappil (Maim. loc. cit., but see Tur and Sh. Ar., loc. cit.). The order of these two portions of the Night Prayer is widely accepted and is probably derived from the talmudic view that "man ought to recite the Shema and repeat it until sleep overcomes him" (TJ, Ber. 1:1, 2d). The rabbinic concept of sleep being a state of minor death is in consonance with this outlook; just as one is obliged in the last hour of life to recite the Shema and bless the unity of G-d, so one should recite the Shema at night and commend one's spirit to G-d before succumbing to sleep. The reversed order, in which the Shema is recited first and is followed by Ha-Mappil, is given by Amram Gaon, but is less common. In Amram's order, the Shema is prefaced by blessing "the Lord Who has sanctified us with His commandments and commanded us to recite the Shema," and concludes (as in the Italian rite) with blessing "the Lord Who guards His people Israel forever." The Ha-Mappil benediction underwent a number of changes and considerable curtailment compared with the original talmudic version (see Yad, Tefillah 7:1, R. Asher to Ber. 9 no. 23; Tur, OH 239).

The significance of the Night Prayer is prophylactic: the Shema and Ha-Mappil are invocations of divine protection against the various dangers that might befall man at night and during sleep, and especially against sin. The latter idea derives from Psalm 4:51: "Tremble, and sin not, commune with your heart upon your bed, and be still." Consequently, some scholars held (Ber. 5a–b) that for a man whose sole occupation was the study of the Torah no Night Prayer was necessary or one short supplicatory text was sufficient, e.g., "I commend my spirit into Thine hand" (Ps. 31:6). According to the Mishnah (Ber. 2:5), a bridegroom on the night of his wedding was exempted from the obligation of reciting the Shema at night because, excited over his nuptials, he would not be able to muster the necessary concentration (Ber. 16a–b; Maim. Yad, Keri'at Shema, 4:1). In later times, however, this exemption was abolished since proper spiritual concentration at prayer was rare anyway (Tur, OH 70).

Subsequently more prayers and scriptural texts were added to the Night Prayer by the talmudists and later authorities: e.g., Psalm 91 (also known as Shir shel Pegga'im; "Song against Untoward Happenings"), Psalm 3, and certain sections from Arvit (e.g., Hashkivenu and Barukh Adonai ba-Yom). Further additions were made under kabbalistic influence, the latter strengthening earlier angelological elements (e.g., Gen. 48:16) in the Night Prayer. It is customary not to recite these additional prayers and texts on the first night of Passover; as this is a "night of watching unto the L-rd" (Ex. 12:42) G-d Himself guards the Jews from the dangers of this night (Sh. Ar., OH 481:2).