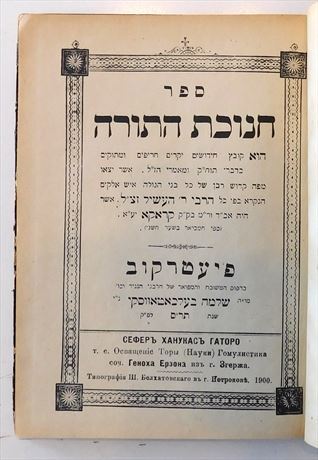 Homilies on and insights into the weekly parasha by R. Abraham Joshua ben Jacob Heschel, one of the great Torah luminaries of the seventeenth century Poland. The title page describes it as a collection of his wondrous novellae, sharp and sweet, precious choice pesahtim based on the words of the sages from his holy mouth. Both nighlah and nistar. These homilies were collected by R. Hanokh Henokh ben Zevi Eliezer. There are several pages of approbations, an introduction from R. Hanokh Henokh, and an index of sources. The text, in two columns in rabbinic type, consists of 227 homilies, followed by Sedeh Zofim, an alphabetic bibliography, and an appendix, Kunteres Aharon. Events connected with R. Heschel and his time are recorded the Kunteres Aharon, which, although containing some legends, also includes much material of historical value.

R. Heschel was a wealthy man, of outstanding piety, and his reputation as a teacher attracted numerous students. A number of them became famous in their own right, among them R. Shabbetai b. Meir ha-Kohen, R. Aaron Samuel Koidanover, R. Gershon Ashkenazi, and R. Hillel of Brest Litovsk. His teaching methods were based on dialectics (pilpul). R. Heschel's renown as a legal authority spread far, and questions were addressed to him from all parts of Europe. Although in many cases he was reluctant to give decisions, when he did, they were brief, logical, and to the point. During the Chmielnicki persecutions many cases of agunot came before him, and R. Heschel exercised considerable leniency in dealing with them. In one such instance, involving a certain Jacob (grandfather of R. Jacob Emden), who was missing after an attack on Vilna, witnesses gave evidence that he had been killed by the Cossacks, and Heschel decided that the wife could remarry; six months later Jacob returned, whereupon R. Heschel resolved that he would refrain in the future from giving decisions in such matters (see: Megillat Sefer by R. Jacob Emden (1897), 7; and J. M. Zunz, Ir ha-Zedek (1874), 111). He was commissioned by the communities of Poland to solicit aid from the wealthy Jewish communities of Austria, Bohemia, and Moravia for the victims of the Chmielnicki massacres. R. Heschel was received everywhere with great respect, and his mission was crowned with success. He was supposedly even received by the emperor of Austria who accorded him great honor. Heschel died in Cracow.

His commentaries on the Sefer Mitzvot Gadol of R. Moses of Coucy were published in its Kapost edition in 1807; they are short and logical, and reveal a fine command of the Hebrew language. R. Aaron Kelniker, a student of Heschel's in Lublin, published a work, Toledot Aharon (Lublin, 1682), containing some of his teacher's novellae on Bava Kamma, Bava Mezia, and Bava Batra, compiled from lecture notes. Later editions were entitled Hiddushei Halakhot (Offenbach, 1723; etc.). In the preface, R. Kelniker briefly described the famous yeshiva of Lublin during his period of studies there under R. Heschel. Some of Heschel's responsa are to be found in works of his contemporaries. His novellae and a commentary on the Shulhan Arukh are still in manuscript.