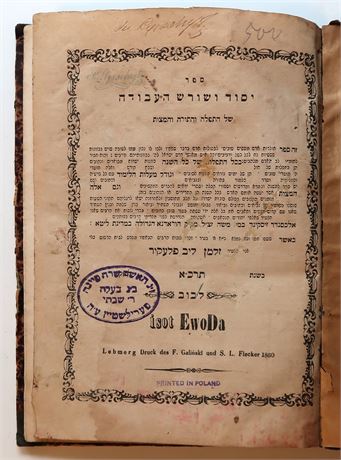 R. Alexander Zusskind b. Moses of Grodno (d. 1793), Lithuanian kabbalist. R. Alexander lived a secluded life in Grodno, never engaging in light conversation so as not to be deterred from study and prayer. Many stories were told about him. According to a well-substantiated one, several days before Passover in 1790, a Jewish victim of a blood libel was sentenced to death unless he agreed to convert. R. Alexander, afraid the condemned man would be unable to withstand the ordeal, obtained permission to visit him in prison, and persuaded him to choose martyrdom. The execution was scheduled for the second day of Shavuot; on that day Alexander left the synagogue in the middle of the service for the place of execution, heard the condemned man recite the prayer of martyrdom, said "Amen," and returned to the synagogue, reciting the memorial prayer for the martyr's soul. The second incident relates that R. Alexander was imprisoned in a German town for soliciting money for the Jews of Erez Israel, as it was illegal to send money out of Germany. On being freed, he immediately resumed collecting, ignoring the danger involved.

R. Alexander's most important work, Yesod ve-Shoresh ha-Avodah (Novy Dvor, 1782; corrected edition, Jerusalem, 1959) a book of ethics, touches upon many aspects of Jewish life. It is divided into 12 sections, the final section Sha'ar ha-kolel, concluding with an account of the coming of the Messiah. According to the author, the basis of divine worship is love of G-d and love of the Jewish people. R. Alexander emphasizes that a Jew must be grieved at the contempt in which the G-d of Israel and the people of Israel are held among the Gentiles, who persecute the chosen people and then ask mockingly, "Where is your G-d?" He speaks often and with great sorrow of the desolation of the holy city of Jerusalem and of Erez Israel and extols "the greatness of the virtue of living in the Land of Israel." In R. Alexander's view, the essence of observance is intent (kavvanah); the deed alone, without intention, is meaningless. For this reason, he insisted on clear and meticulous enunciation of each word in prayer, giving many examples of how words are distorted in the course of praying. He also laid down a specific order of study: Talmud, musar, literature, and then Kabbalah. He emphasizes the need for study of the geography of the Bible.

R. Alexander was rigid in the matter of religious observance, threatening violators with severe retribution in the hereafter. He asked every Jew to resign himself to "the four forms of capital punishment of the bet din" and in his will he ordered that upon his death his body be subjected to stoning. Yet the central theme of his work is "worship the Lord in joy." His ideas make R. Alexander's writings closely akin to the basic tenets of Hasidism and R. Nahman of Bratslav said of him, "he was a Hasid even before there was Hasidism." In annotated prayer books, especially in those of the Sephardi rite, his Kavvanot ha-Pashtiyyut, the "intent" of the text of the prayers as set forth in the Yesod ve-Shoresh ha-Avodah, is appended to most of the prayers. He was deeply revered and as long as there was a Jewish community in Grodno, men and women went to pray at his grave. Descendants of his family who originally went by the name of Braz (initials for Benei Rabbi Alexander Zusskind) later assumed the name Braudes.