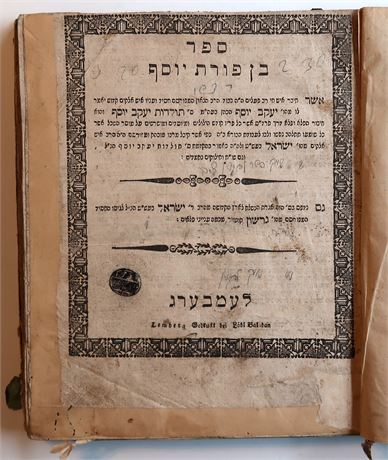 R. Jacob Joseph b. Zevi ha-Kohen Katz of Polonnoye (d.c. 1782), rabbi and preacher; the first theoretician of Hasidism. R. Jacob Joseph, whose birthplace is unknown, became rabbi of Shargorod, the second largest community of Podolia. In 1741 he came under the influence of R. Israel b. Eliezer Ba'al Shem Tov (the BeShT). A controversy with his community ensued, as a result of which he was expelled from Shargorod in about 1748. He left for Raszkow, a very small community, where he remained until 1752. In 1750/51, he hoped to go to Erez Israel, but this project did not materialize. From Raszkow, he went to Nemirov, where he remained until 1770 and openly propagated Hasidism. On the death of R. Aryeh Leib, the preacher of Polonnoye, R. Jacob Joseph was appointed to this position, which he held for the remainder of his life. His son, R. Abraham Samson, who settled in Tiberias and Safed, was childless. He published his father's writings. His relative by marriage was R. Hayyim b. Menahem Zanzer, head of the kabbalists of the klaus of Brody. <p>R. Jacob Joseph's first and main work was Toledot Ya'akov Yosef (Korets, 1780), containing homiletics of the author, as well as the "words which I heard from my teacher," namely, the Ba'al Shem Tov. It is the first work to express the basic teachings of Hasidism, both in a positive formulation as well as in the bitter criticism it contains of the traditional Jewish leadership and its scale of values. The work played an important role as one of the factors which aroused opposition to Hasidism. Copies of it were apparently burned in Brody. R. Jacob Joseph's other works are Ben Porat Yosef (Korets, 1781), homilies mainly on Genesis; at the end, the letter sent by the Ba'al Shem Tov to his brother-in-law in 1750/51 was published for the first time; Zafenat Pa'ne'ah (Korets, 1782), a commentary on Exodus; and Ketonet Passim (Lemberg, 1866), a commentary on Leviticus and Numbers. From various allusions, it has been assumed that R. Jacob Joseph also left a large work in manuscript destined to be a commentary on Deuteronomy. R. Jacob Joseph's homilies are traditional in structure. Their content reveal him as leader of a community, as well as a penetrating and incisive theoretician and social critic. He viewed the preacher as the physician of the soul which he helps to cure by means of the ethical principles which he teaches. The preacher should pay due attention to the general form of the sermon, its content and method of delivery, and adapt it to the standard of his audience.

R. Jacob Joseph taught that the presence of G-d is manifest everywhere and in each and every human thought; even "when man is engaged in prayer and an alien and evil thought enters his mind, it has come to man so that he may improve and uplift it. If he does not believe in this, then his acceptance of the rule of the Kingdom of Heaven is incomplete because, Heaven for-fend, he then restricts His presence" (Ben Porat Yosef). He proposes that man should resolve the ever-present tension created by matter which draws him to evil and by spiritual form which calls him to good through combining the joy of matter with that of form, thus achieving the perfect joy. Evil inclination will then be subdued of itself, becoming the tool of good. The ultimate purpose of man is "Thou shalt adhere to Him." This adhesion is only possible through joy, while fasting and self-affliction bring sorrow, and sorrow is the root of all evils. Prayers should be recited with a purified and concentrated mind and with joy. It is within the power of the zaddik to change an evil decree to a favorable end through his prayer, also on behalf of those who are associated with him. The same relationship within man also exists within society. There is the "multitude" and the "scholar." The man of merit and form is the zaddik, while the "multitude" is matter. The zaddik is likened to the head or the eyes of the body, and the multitude to the feet. The congregation is thus conceived as a living organism, the zaddik being its life and soul in his generation. This organismic premise precludes the concept that only a few are elect. It follows that the interrelationship in this corporate body causes any failure on the part of even the lowest member - whether in matter or in spirit - to be reflected far more damaging in the state of "the head" - the zaddik. None of the members can adhere truly to G-d, so long as only one, even if an ignoramus, is not conscious of his need to be uplifted through the head (the zaddik). Hence it is the duty of the zaddik to exert his influence over him. Moreover, for the sake of this unification with the multitude, and so as to be able to uplift it, a zaddik may sometimes have to descend from his own level and to sin for the good of his task. This concept of the "descent of the zaddik" holds an important place in R. Jacob Joseph's teachings. The Jew of the multitude is incapable "of studying the Torah, and as this is through no neglect of his own, God will not punish him" if he adheres to the zaddik. He is enjoined to believe in the zaddik with absolute faith, without any afterthoughts or doubts as to the zaddik's way of life, because all his actions are performed for the sake of Heaven.<p>The "man of matter" must also support the zaddik financially to enable him to fulfill his duty successfully and devote himself to G-d through Torah study and prayer. R. Jacob Joseph taught the importance of the communal Sabbath "third meal" for the hasidic congregation, saying that he who does not participate in it with his brethren "makes his Sabbath profane" (Toledot Ya'akov Yosef, beginning of the section on Noah). Jacob Joseph's hostility to the ordinary type of rabbi is expressed in his denunciation of them as "Jewish demons, the equivalent of the Satan and the evil inclination itself, the whole of their Torah studies being for their personal aggrandizement."