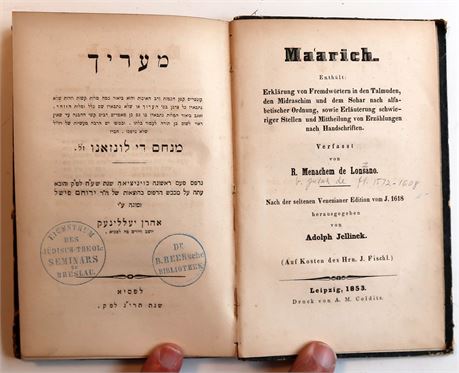 First independent edition of this addition to R. Nathan ben Jehiel of Rome’s He-Arukh by R. Menahem ben Judah de Lonzano. He-Arukh is an extensive collection of explanations of words and subjects in the Talmud, first printed in Rome in c. 1469–72. Ma’arikh was initially printed as part of R. Lonzano’s Shetei Yadot (Venice, 1618), but was not printed as a separate work until the appearance of this edition. It is based on de Lonzano’s extensive knowledge of Greek and Arabic and other languages (Turkish and Persian) used by his Jewish contemporaries. There are German and Hebrew title pages, a forward, and then the text, in a single column in square letters, arranged alphabetically.

R. Menahem ben Judah De Lonzano, (1550–before 1624) was a linguist, poet, and kabbalist. Little is known about his life, but it is assumed that he was born in Constantinople. At the age of 25 he emigrated to Jerusalem and later moved to Safed. Forty years later, he went to Turkey and to Italy, and in 1618 he returned to Jerusalem. R. Lonzano was best known for Shetei Yadot (Venice, 1618), which is divided into two sections (Yad Ani and Yad ha-Melekh). The first contains his original writings and the second the midrashic literature which he intended to edit. Each section is called yad ("hand") and has five ezba'ot ("fingers"). Yad Ani includes the following: Or Torah (also separately, Amsterdam, 1659), notes on the masorah ("text") of the Torah according to the weekly portions, comparing the printed Venice editions with important manuscripts which he knew. Because his work relates only to the Torah, it became second in importance to Minhat Shai, by his contemporary Solomon Norzi, which treats the entire Scripture. Despite this fact Lonzano's work was reprinted in many editions with additions and interpretations; Ma’arikh; Avodat haMikdash (also separately, Constantinople, 1572), prayers for the order of worship in the Temple, with additions according to "the wisdom of the Zohar;" Derekh Hayyim (also separately, Constantinople, 1573), moralistic poetry; Tovah Tokhahat, a long moralistic poem. From Yad ha-Melekh, he only managed to publish the first section, Aggedata de-Bereshit, which was reprinted many times. He intended to conclude the publication of Midrash Agur, which had begun to appear in Safed in 1587, and also planned to publish other important Midrashim according to manuscripts which he himself discovered, but this material has been lost. Lonzano's other works treat Lurianic Kabbalah and aroused bitter opposition: Omer Man, a commentary on the Idra Zuta and the Sifra de-Zeni'uta (Vilna, 1883); Imrei Emet, a critique of Luria's interpretation of Sifra de-Zeni'uta and repudiations of Hayyim Vital. According to Lonzano, Luria wrote his commentary before he received divine inspiration and "if he could, he would have changed or hidden this work" (Ms. British Museum 9167). Other works planned by Lonzano were hidden and only parts of them were preserved in manuscripts or published posthumously.

They include: a commentary on the Zohar (fragment, in manuscript); comments on Tikkunei Zohar (Ms.); Haggahot le-Zohar Hadash (Venice, 1643); Haggahot le-Talmud Yerushalmi (Warsaw, 1737); Adi Zahav, annotations on the book Ha-Levushim by Mordecai Jaffe; comments on the prayer book (lost). Lonzano's originality caused him to suffer from the attacks of his opponents. In this matter his dispute with Gedaliah Cordovero is of interest, but its background is still not clear. He was a thorough scholar. In search of manuscripts he made several trips abroad where he met with many scholars. As a poet, Lonzano was involved in a quarrel with Israel Najara whom he criticized because of his use of erotic language and words such as "adulterers say to one another" (Shetei Yadot, 142) to describe the relationship between Israel and G-d.