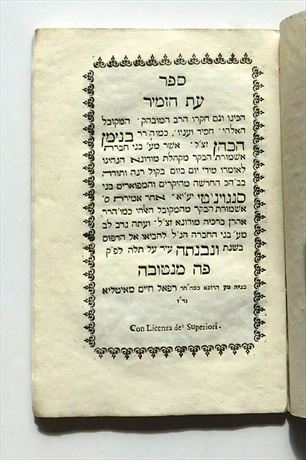 Hymns and piyyutim to be said daily and on festivals by the Ashmoret ha-boker society in in the new synagogue in Modena by R. Benjamin ben Eliezer Ha-Kohen Vitale of Reggio. These prayers are to be said with singing and thanksgiving. The title page is dated, “and the city shall be build ונבנתה (613 = 1753) upon her own mound” (Jeremiah 30:18). There is verse in praise of the author from R. Isaiah ben Israel Hizekiah Bassan. Most of the piyyutim in Et ha-Zamir are kabbalistic. The text, which is in a single column in vocalized Hebrew, is divided by the days of the week and by festivals. There is a woodcut filler on 2a.

R. Benjamin ben Eliezer Ha-Kohen Vitale of Reggio (1651–1730), Italian kabbalist. Benjamin, who was among the leading disciples of R. Moses Zacuto in Mantua, was rabbi in his native town of Alessandria, Piedmont, until 1682 and afterward in Reggio. He became well-known as a preacher and poet, but in particular as a kabbalist; he was considered one of the major exponents of R. Isaac Luria’s Kabbalah in Italy. He also wrote numerous notes and glosses on R. Luria’s works, some of which were published together with the writings of Luria (particularly in the Korets editions). His books are written in the spirit of ascetic kabbalah. R. Benjamin was a close friend of R. Abraham Rovigo in Modena, and desired to immigrate with him to Erez Israel. However, these plans failed. Both he and Rovigo were among the believers in Shabbetai Zevi even after the latter's apostasy and for decades he was among the leading secret Shabbateans in Italy, without, however, relinquishing his ascetic way of life. R. Benjamin was among the chief proponents of a modern "hasidic" Shabbateanism which sought to combine traditional Judaism with the belief in the messianic character of Shabbetai Zevi. He did not openly express his Shabbatean views in print, but in Allon Bakhut (on Lamentations, Venice, 1712) he dared to explain the lamentations as joyful hymns on the Redemption, on the Shabbatean supposition of the change in their meaning in "the days to come." Many leading Shabbateans met in his home; he also made a point of collecting information about the "faith" and was greatly interested in every new manifestation of a Shabbatean prophet. While his Shabbateanism was still moderate, Benjamin was the teacher of Hayyim Malakh. In his writings Benjamin kept apart the Lurianic Kabbalah from the new Shabbatean Kabbalah of Nathan of Gaza. He refused to join in the persecution of the Shabbatean Nehemiah Hayon (1714). One of his Shabbatean pamphlets, Sod Adnut Adonenu ("The secret of the Lordship of our lord [Shabbetai Zevi] according to Nathan"), was published by A. Freimann. R. Isaiah Bassan, his son-in-law and successor as rabbi of Reggio, was R. Moses Hayyim Luzzatto's teacher. When the aging R. Benjamin learned of R. Luzzatto’s revelations in Kabbalah, he wrote asking him about the root ("shoresh") of his soul, and its restitution ("tikkun"). A small part of the correspondence between R. Benjamin andR. Moses Zacuto, is extant in Iggerot ha-Remaz (Leghorn, 1780). Others are still in manuscript. A large collection of his sermons (Gevul Binyamin) was published in his old age (Amsterdam, 1727). Some of his halakhic rulings were published in Lampronti's Pahad Yizhak. R. Benjamin’s responsa, She’elot u-Teshuvot ha-Re (1970) were published by Chief Rabbi Yitzhak Nissim.