Safra with commentary of Rabad, Vienna 1862 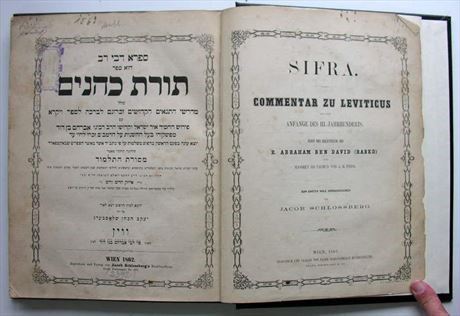 The Midrash with the commentary of the Ravad printed from a manuscript in the Oxford Library. Sifra is a midrash halakhah from the school of R. Akiva on the Book of Leviticus. The Aramaic word sifra means "book" or "The Book." This name was commonly used in Babylonia, and most likely attests to the centrality and importance of this Midrash. In the Land of Israel this Midrash was called Torat Kohanim, corresponding to the name given to the Pentateuchal book.

R. Abraham b. David of Posquieres (Rabad, c. 1125–1198); talmudic authority in Provence. Rabad was born in Narbonne, and died in Posquières, a small city near Nîmes famous for the yeshivah he established there. He lived during a remarkable period of remarkable development of intellectual activity in southern France. His father-in-law, R. Abraham b. Isaac, who headed the rabbinical court in Narbonne, exerted considerable influence on Rabad, whose brilliance he fully appreciated. Rabad studied with R. Moses b. Joseph and R. Meshullam b. Jacob of Lunel, two of the most respected and influential scholars of the time. R. Meshullam encouraged the methodical transmission of the philosophic, scientific, and halakhic learning of Spanish Jews to French Jewry, and his influence on Rabad in this respect was great. It also seems safe to assume that the enlightened atmosphere of his circle widened the scope of Rabad's learning so that he developed into a keen and resourceful halakhist, undisputed master in his own field, and highly knowledgeable in developments in related areas (philosophy and philology). He encouraged R. Judah ibn Tibbon, who had translated the first chapter of R. Bahya ibn Paquda's Hovot ha-Levavot at the request of R. Meshullam of Lunel, to complete the translation. R. Meshullam stimulated R. Abraham's literary creativity by having him compose a treatise (Issur Mashehu, in: S. Assaf, Sifran shel Rishonim (Jerusalem, 1935, 185–98; M. Hershler, Jerusalem, 1963)) on an important problem of Jewish ritual law.

A mature scholar, prominent in Montpellier and Nîmes, and a man of great wealth (it has been suggested that he dealt in textiles), he settled permanently in Posquières, except for a short period (1172–73) when he fled to Narbonne and Carcassonne as a result of hostility on the part of the local feudal lord. He founded and directed a school to which advanced students from all parts of Europe flocked and he provided for all the needs of indigent students out of his own pocket. Some of his students and close followers, R. Abraham b. Nathan ha-Yarḥi, R. Isaac ha-Kohen, R. Meir b. Isaac , R. Jonathan b. David ha-Kohen of Lunel, R. Asher b. Saul of Lunel, and his own son R. Isaac the Blind (of Posquières) became distinguished rabbis and authors in the principal Jewish communities of Provence, thus extending R. Abraham's influence and contributing to significant literary developments at the end of the 12th and the beginning of the 13th centuries. He himself asserted that his word was law in all Provence (Temim De'im (Lvov, 1812), 12a–b, no. 113). Scholars from Franco-Germany, Spain, North Africa, Italy, Palestine, and Slavic countries knew, studied, and respected him. Nahmanides describes his erudition and piety with great awe and R. Solomon b. Abraham Adret says that R. Abraham revealed unfathomed depths of the law "as if from the mouth of Moses, and explained that which is difficult" (Torat ha-Bayit, Beit ha-Nashim, introduction).

Rabad's literary activity was original and many sided. His works may be classified under the headings of codes of rabbinic law, commentaries on various types of talmudic literature, responsa, homiletic discourses, and critical annotations and glosses (hassagot) on standard works of rabbinic literature. His writings are characterized by precision in textual study, persistence in tracing statements back to their original source, discovery of later interpolations, and logical analysis of problems. He was one of the most skillful practitioners of the critico-conceptual method of talmudic study – probing into the inner strata of talmudic logic, defining fundamental concepts, and formulating disparities as well as similarities among various passages in the light of conceptual analysis. As a result, abstract, complex concepts, which were discussed fragmentarily in numerous, unrelated sections of the Talmud, are for the first time defined with great vigor and precision. This critical methodology was the first clean break from the geonic method of Talmud study. By doing so, Rabad approached each rabbinic subject unaided by the wisdom of the previous generations. On the one hand, he viewed each subject as part of the greater talmudic whole; yet on the other hand, he only commented on what interested him. Thus, his commentaries may be described as annotatory rather than cursory, that is, closer to the tosafistic method of textual elucidation and analysis than the method of complete, terse textual commentary associated with Rashi or R. Hananel. Many of his theories and insights were endorsed and transmitted by subsequent generations of talmudists and incorporated into standard works of Jewish law up to the Shulḥan Arukh and its later commentaries. Indeed, his talmudic commentaries had an enormous impact on the next generation of talmudic scholars, notably Naḥmanides and his disciple, R. Solomon ben Abraham Adret . Even though they continued to quote him frequently, the scholarship and reputation of these and other scholars of the succeeding generations overshadowed Rabad's work. Rabad's talmudic commentaries firmly established his position among Jewish scholars. With the first publication of Rabad's hassagot alongside Maimonides' text of the Mishneh Torah in the early 16th century, Rabad's reputation shifted from that of commentator on the Talmud to commentator on the Mishneh Torah.

Some medieval writers, notably R. Ḥasdai Crescas (Or Adonai, introduction) assert that Rabad wrote a commentary on the entire Talmud and R. Menahem b. Solomon Meiri described him as "one of the greatest of the commentators" (Beit ha-Beḥirah, passim). Only sections of this imposing undertaking have been preserved and only two complete commentaries on Bava Kamma (Kaidan, 1940; Jerusalem, 19632) and Avodah Zarah (New York, 1960) have been published; sizable extracts are to be found in the Shitah Mekubbeẓet of Bezalel Ashkenazi and citations from it are quoted in the writings of the rishonim. His commentary and tosafot to the first two chapters of Kiddushin have been published by Wacholder, in: HUCA 37 (1966), Heb. sect. 65–90.