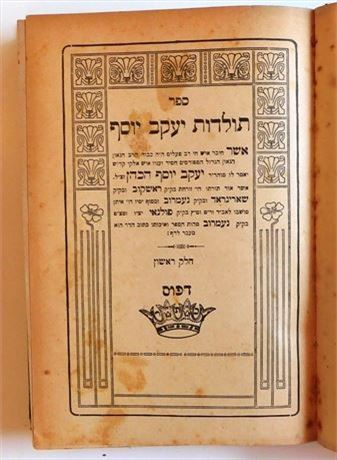 This edition was published for Holocaust survivors in German DP camps. Reprint of the first Hasidic work ever published, contains homilies on the Pentateuch. R. Jacob Joseph ben Zevi Ha-Kohen Katz of Polonnoye (d.c. 1782), rabbi and preacher; the first theoretician of Hasidism. R. Jacob Joseph, whose birthplace is unknown, became rabbi of Shargorod, the second largest community of Podolia. In 1741 he came under the influence of R. Israel b. Eliezer Ba'al Shem Tov (the BeShT). A controversy with his community ensued, as a result of which he was expelled from Shargorod in about 1748. He left for Raszkow, a very small community, where he remained until 1752. In 1750/51, he hoped to go to Erez Israel, but this project did not materialize. From Raszkow, he went to Nemirov, where he remained until 1770 and openly propagated Hasidism. On the death of R. Aryeh Leib, the preacher of Polonnoye, R. Jacob Joseph was appointed to this position, which he held for the remainder of his life. His son, Abraham Samson, who settled in Tiberias and Safed, was childless. He published his father's writings. His relative by marriage was R. Hayyim b. Menahem Zanzer, head of the kabbalists of the klaus of Brody. R. Jacob Joseph's first and main work was Toledot Ya'akov Yosef (Korets, 1780), containing homiletics of the author, as well as the "words which I heard from my teacher," namely, the Ba'al Shem Tov. It is the first work to express the basic teachings of Hasidism, both in a positive formulation as well as in the bitter criticism it contains of the traditional Jewish leadership and its scale of values. The work played an important role as one of the factors which aroused opposition to Hasidism. Copies of it were apparently burned in Brody.

R. Jacob Joseph's homilies are traditional in structure. Their content reveal him as leader of a community, as well as a penetrating and incisive theoretician and social critic. He viewed the preacher as the physician of the soul which he helps to cure by means of the ethical principles which he teaches. The preacher should pay due attention to the general form of the sermon, its content and method of delivery, and adapt it to the standard of his audience. R. Jacob Joseph taught that the presence of G-d is manifest everywhere and in each and every human thought; even "when man is engaged in prayer and an alien and evil thought enters his mind, it has come to man so that he may improve and uplift it. If he does not believe in this, then his acceptance of the rule of the Kingdom of Heaven is incomplete because, Heaven forfend, he then restricts His presence".