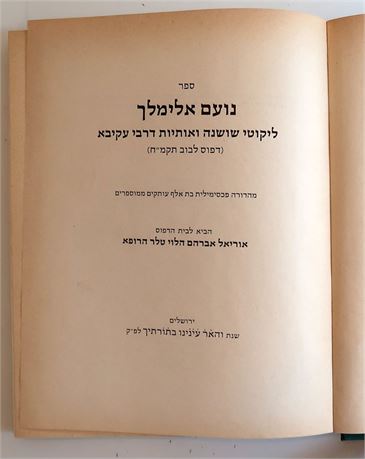 Primary work of Hasidut by the revered R. Elimelech of Lyzhansk (1717–1787), of the third generation of Hasidim and one of the founders of Hasidism in Galicia. This edition was printed by the distinguished Schulsinger Brothers press, known for their fine editions of classic Hebrew works. It was brought to press by R. Osias Wagschall, a descendant of the No’am Elimelekh. It includes a reproduction of the title page of the first 1787 edition and a Zetel Katan from R. Elimelech of Lyzhansk on the proper conduct of a person. ,p> It is told that concerning the title of No’am Elimelekh, that after Rebbe Elimelech passed away his brother, Rebbe Reb Zisha of Hanipoli, was approached by R. Elimelech’s students to be their new leader. R. Zisha declined, explaining with a parable; “The possuk in Bereshis 2:10 states “And a river went forth from Eden to water the garden and from there it split into four paths.” The Torah is eternal and alludes to all events above and below for all generations. Eden alludes to our holy master the Baal Shem Tov. The river was his student the holy Mezitcher Maggid. The garden refers to my brother the Rebbe Elimelch. This then is the meaning: a river flows from Eden to water the garden, the Torah flows as water from the Baal Shem Tov by way of the Mezritcher Maggid to the Rebbe Elimelech. From there it separates into four paths: they are 1.The Holy Rebbe the Chozeh or Seer of Lublin. 2.The Holy Rebbe Avodas Yisrael the Koznitzer Maggid. 3. The Holy Rebbe Mendel Rimanover and 4.The Holy Ohev Yisrael the Apta Rav. You need no Rebbe other than them.” Furthermore, there is a story about R. Shneur Zalman of Liadi the founder of Habad Hassidism, that he once said “My sefer Tanya is also called “sefer shel beynonim” a book for the average Jew. But the sefer Noam Elimelech is a “sefer shel Tzadikim” a book for the righteous.

R. Elimelech of Lyzhansk (1717–1787), was a disciple of R. Dov Baer the Maggid of Mezhirech and is considered the theoretician and creator of “practical zaddikism.” R. Elimelech and his brother R. Zusya of Hanipol traveled from village to village, according to the principle of nedudei galut (“wanderings of exile”), i.e., their travels, symbolically expressed their identification with the wanderings of the shekhinah (Divine Presence). According to a later interpretation, the purpose of their wanderings was the promotion of repentance. After the death of R. Dov Baer (1772), R. Elimelech settled in Lyzhansk, Galicia, which as a result became an important hasidic center.

R. Elimelech formulated the mores of hasidic society in the doctrine of the zaddik. In contrast with the view that the zaddik was solely a spiritual leader, Elimelech maintained that the zaddik possessed the task of leadership in all spheres of life. The zaddik had to live in the dialectical tension between the spiritual life of devekut (devotion) and the pragmatic, materialistic requirements of society. Apparently, R. Elimelech himself could not withstand the pressure of the life of a zaddik, and toward the end of his life concentrated on self-fulfillment. He withdrew from his disciples and even neglected the spiritual leadership of his community. According to R. Elimelech, the zaddik possesses a higher spiritual status than the seraphim and is the foundation of the world. He has power to influence the higher spheres, i.e., “the zaddik decrees and God fulfills” (Shab. 59b, cf. No'am Elimelekh, “Shelah”). The authority of a hasidic leader comes from his direct connections with higher powers whose assistance he receives for his concerns for the individual and the community. “Every utterance of the zaddik creates an angel, and influences higher spheres” (ibid.). By means of reflection and contemplation, the zaddik wages a war whose ultimate purpose is devekut and the ascent to the absolute. He “lives below” (i.e., on earth) “but in reality he dwells in higher worlds” (ibid., “Va-Yera”). The zaddik faces the danger of death from an excess of enthusiasm. Therefore, God calms him in the height of his devekut in order that he not die from the ecstasy of the mystical experience. The condition of devekut is not static, but varies in its intensity, having ascents and descents.

These ideas appear in No'am Elimelekh (Lvov, 1787) arranged in the form of sermons on the weekly readings of the Torah, mostly describing how the zaddik worships God. It includes his letters, his religious testament on matters of leadership, and a treatise, Likkutei Shoshanim. R. Elimelech's disciples were R. Abraham Joshua Heshel of Apta, R. Jacob Isaac Horowitz, the Seer (“Ha-Hozeh”) of Lublin, R. Kalonymus Kalman Epstein of Cracow (author of Ma'or va-Shemesh), R. Menahem Mendel of Rymanow, and R. Moses Leib of Sasov.