History of the Mir in Exile, R. Chuna Hertzman, Brooklyn 1950 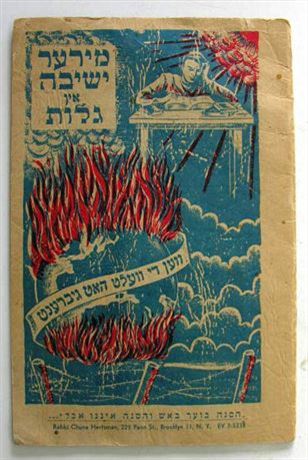 History of the Mir Yeshiva during the Holocaust, its exile to Shanghai, and current operations in Yiddish.

The invasion of Poland in 1939 by Nazi Germany from the west and the Red Army from the east meant the yeshiva was unable to remain in Mir, which was now under Soviet Communist rule. Many of the foreign-born students left, but the bulk of the yeshiva relocated to Lithuania, which had been overrun by Soviet Russia, but not yet Sovietized. The yeshiva was first re-established in Wilno, and then in Keidan, Lithuania. Not many months elapsed before Lithuania became virtually annexed by Soviet Russia, and the future of the yeshiva was again in peril. The yeshiva was split into four sections: The "first division", under the leadership of Rabbi Chaim Leib Shmuelevitz as rosh yeshiva and Rabbi Yechezkel Levenstein as mashgiach, relocated to Krakinova; the other three divisions went to the three small towns of Ramigola, Shat and Krak. It was obvious, however, that this arrangement was only a temporary solution, and that ultimately the yeshivah would need to flee Soviet-occupied Lithuania in order to survive. In the summer of 1940, several students of the yeshivah learned that the Dutch ambassador to Lithuania was willing to provide them with destination-visas to the Caribbean island of Curaçao. Concurrently, it became known that the Japanese consul in Lithuania, Chiune Sugihara, had agreed to issue transit visas to refugees who wished to escape via the Japanese-occupied Pacific. As a result of these fortuitous events (seen by many to this day as acts of divine providence) most of the yeshivah students requested and received several thousand transit-visas from Sugihara, permitting them to depart to the Far East.

In the fall of 1940, the yeshiva students traveled via the trans-Siberian railroad to Vladivostok, Russia; and then by ship to Tsuruga, Japan. The yeshiva reopened in Kobe, Japan in March 1941. A short time later, Japan expelled the Jews from its mainland, and the yeshiva relocated again, to (Japanese-controlled) Shanghai, China, where they remained until 1947. In Shanghai, Rabbi Meir Ashkenazi, a Lubavitcher chasid who served as the spiritual leader of the Jewish refugees, arranged for the yeshiva to occupy the Beth Aharon Synagogue, built in 1920 by a prominent Jewish Shanghai businessman, Silas Aaron Hardoon. For the first few weeks, until funds could be sourced for provisions, the yeshiva community suffered from malnutrition.