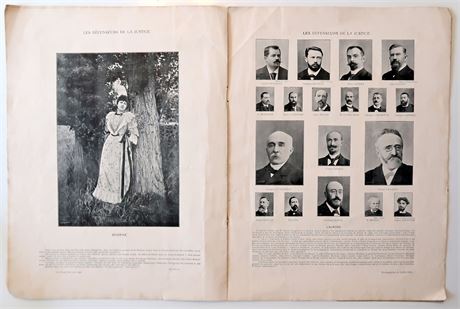 Special issue with 150 Dreyfus depictions in black and white on gloss paper.

The Dreyfus Affair: In the fall of 1894 a secret military document (the bordereau) sent by a French officer to the military attache of the German embassy in Paris, Col. von Schwartzkoppen, fell into the hands of the French Intelligence Service. On the basis of a certain similarity of handwriting, and probably out of anti-Jewish prejudice against Dreyfus, the heads of the Intelligence Service - among whom Major H. J. Henry was conspicuous - threw suspicion upon Dreyfus. He was arrested and tried before a court-martial. The trial took place in camera and the testimonies were insufficiently verified. It was also not disclosed that contrary to all legal procedure the ministry of war had placed a file of secret documents (part of which were forgeries) before the tribunal, a fact concealed even from Dreyfus' attorney. The court unanimously found Dreyfus guilty of treason, and he was sentenced to life imprisonment. On January 5, 1895, Dreyfus was publicly demoted in a degrading ceremony, during which he continued to proclaim, "I am innocent." The mob, which had been incited by the anti-Semitic press, especially by E. A. Drumont, accompanied the ceremony with fulminations against Dreyfus and the Jews. Dreyfus was exiled to Devil's Island (French Guinea, off the coast of South America), even though in the meanwhile, the German ambassador had declared formally that Germany had had no contact with Dreyfus.

Dreyfus' brother turned to the writer Bernard Lazare, who now led the struggle against the verdict. In November 1896 Lazare published a pamphlet, "The Truth about the Dreyfus Affair," and sent it to members of the senate and public figures. The new head of the French Intelligence Service, Lt. Col. Georges Picquart, had independently sensed something suspicious in the Dreyfus trial. In March 1896, Intelligence Service personnel seized a letter which Schwartzkoppen had written to a French major, Ferdinand Walsin Esterhazy, an adventurer of aristocratic Hungarian origin. This made it clear that Esterhazy was a German agent. Picquart concluded that the bordereau incriminating Dreyfus had been written by Esterhazy. Henry forged additional documents to prove to his superiors that the court-martial had not erred. Picquart was dismissed from his position and dispatched to serve in Africa. Before leaving Paris he transmitted the facts to his friends. Through them they reached the ears of the left-wing senator, Auguste Scheurer-Kestner, who announced in the senate that Dreyfus was innocent, and openly accused Esterhazy. The right-wing prime minister, F. J. Eeline, refused to accept his statement and tried to hide the facts. The Dreyfus case increasingly became the focus of the political struggle centering round the regime, its image and principles, and fought in all strata of French society, including circles close to the government. Esterhazy was tried and acquitted, while Picquart was punished with 60 days imprisonment. On January 13, 1898 L'Aurore, Georges Clemenceau's newspaper, published an open letter from the novelist Emile Zola to the president of the republic, captioned "J'accuse!", which accused the denouncers of Dreyfus of malicious libel. The article made a powerful impression; 200,000 copies were sold in Paris. Zola was found guilty of libel in February 1898. Officers of the general staff threatened to resign if Dreyfus was acquitted and anti-Semitic riots occurred in different parts of the country. In the meantime confidence in the justice of the verdict was waning. The affair aroused lively interest abroad and in France it became a public issue. Parties, social circles, and even families were split. The antagonistic groups formed two camps - the Ligue des Droits de l'Homme, which spearheaded the fight for Dreyfus, and the Ligue de la Patrie Francaise, led by Paul DeroulIde. Many of the supporters of the latter camp considered that a single case of injustice involving one Jew was not sufficient grounds for staining the honor of the army.

In summer 1898 the protestations of Picquart and others induced the new war minister, Cavaignac, to reopen the case and re-investigate the documents. Henry's forgeries were detected. He was arrested and subsequently committed suicide in his cell. Public opinion moved in Dreyfus' favor and the controversy divided the government. At last the government decided to request an annulment of the verdict and a retrial for Dreyfus from the Supreme Court. The political agitation continued, and after several crises Rene Waldeck-Rousseau formed a cabinet whose avowed aim was to restore the rule of law and justice and reestablish democracy.

The second trial took place in Rennes. The army officers adhered to their original testimony. Finally, on September 9, 1899, the court-martial decided by a majority that Dreyfus had committed treason - but because of "extenuating circumstances" he was sentenced to only ten years' imprisonment, five of which he had already served. Anti-Semites and reactionaries viewed the verdict as a justification of their position. Differences of opinion developed between Dreyfus' defenders: those to whom the Dreyfus affair was a political issue and a matter of principle wanted him to appeal and continue the struggle, while Dreyfus and his family were interested only in securing his release. At Waldeck-Rousseau's suggestion, Dreyfus withdrew his appeal and was finally granted a "pardon" by the president of the republic. In 1904, with the Leftist government firmly established, Dreyfus demanded a fresh investigation. The Court of Appeal reexamined the case, and in 1906 pronounced that the evidence against Dreyfus was completely unsubstantiated and that it was unnecessary to order a further trial to exonerate him.

The Dreyfus affair was a turning point in the history of the Third Republic. It embittered the struggle between the opponents and partisans of the republican regime. The Waldeck-Rousseau cabinet succeeded in enacting a number of anti-clerical measures, and in 1905 it passed a law separating the church from the state. This also influenced the status of the Jewish Consistory in France. The Dreyfus affair made a powerful impact on the attitude of the socialist parties toward the Jews. The radical Marxist wing under Jules GuIsde, which identified Jews with the capitalists and viewed the affair as an internal concern of the bourgeoisie, retreated before the socialist-humanitarian wing led by Jean-Leon JaurIs. Proletarian anti-Semitism weakened. The Dreyfus affair made a strong impact on the outlook of world Jewry and the atmosphere in their respective countries. Jews everywhere were shocked that the affair could take place in France, the "homeland of liberty and the Great Revolution," and that hatred of the Jews could still prejudice the behavior of a considerable part of the French people, in particular when the Jewish victim was completely assimilated. This seemed to prove clearly that assimilation was no defense against anti-Semitism. Theodor Herzl's confidence in liberalism was shaken when he personally observed the French mass reaction and the uproar that the Dreyfus case aroused. The experience led him to Zionism.

Echoes of the Dreyfus affair continued to reverberate in France for over a generation. Its consequences were still recognizable in the line that divided the Vichy government from the Free French during World War II.