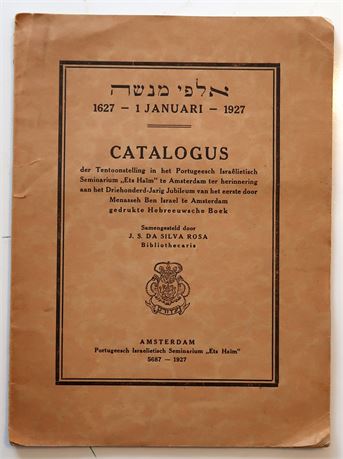 Manasseh Ben Israel (1604–1657), was born a Marrano in Madeira and baptized as Manoel Dias Soeiro. His father, Gaspar Rodrigues Nunez, escaped from Lisbon after appearing as a penitent in an auto-da-fe and settled in Amsterdam, where he took the name Joseph ben Israel and renamed his two sons Ephraim and Manasseh. Manasseh became a member of the Hevrah for Talmud Torah at the age of 12, began to frequent the yeshivot when he was 14, made his first public oration in Portuguese when he was 15, and at 17 wrote his first book, Safah Berurah, a grammatical work (unpublished). Manasseh succeeded R. Isaac Uzziel as preacher to the Neveh Shalom congregation in 1622. He founded the earliest Hebrew printing press in Amsterdam (1626), where he continued to publish works in Hebrew and Spanish (Portuguese) for the remainder of his life. He was a prolific and influential author. He is also remembered for his attempts to gain entry for the Jews into England.