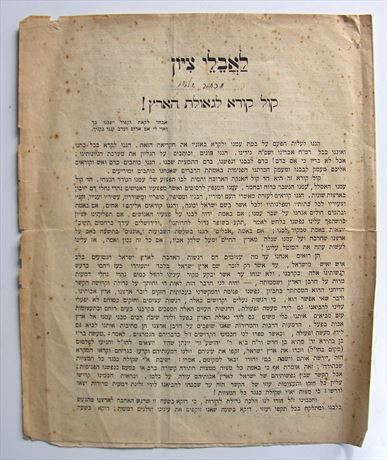 R. Isaac Jacob Reines (1839–1915), rabbi, one of the founders and first head of the Mizrachi movement. Born in Karolin, Belorussia, Reines studied at the Eishishok (Eisiskes) and Volozhin yeshivot and was ordained by leading rabbis. He served in the rabbinate in Shavkyany (Saukenai), Lithuania, from 1867; in Sventsyany (Svencionys), Vilna district, from 1869; and in Lida from 1885 until his death. Reines made a distinct contribution to rabbinic scholarship, introducing a new and almost modern methodology which was in contrast to the current system of pilpul. It was based upon a purely logical approach and was influenced by Maimonides' Millot ha-Higgayyon; it is actually called "Higgayon" ("Logic"). In the introduction to his first major halakhic work, Hotam Tokhnit (2 parts, 1880–81) he emphasized this new approach, as he did in his later works (e.g., Urim Gedolim, 1887). The Hotam Tokhnit made a great impression, especially in Western Europe where Jews were not accustomed to works on halakhah with a strictly logical approach that had been written by Eastern European scholars. He also applied his new approach in his homiletical books (Nod shel Dema'ot, 1891), which, like others of his works, went through a number of editions. Reines tried to introduce the spirit of the times in his public activities, without breaking with tradition, and founded a yeshivah in Sventsyany. Because its curriculum included secular studies, he aroused the anger of some religious fanatics and was forced to close the school after a few months. Reines joined the Hibbat Zion movement from its creation. His attachment to Erez Israel was due principally to the influence of his father, who stayed in Erez Israel in the 1830s. Reines cooperated with Samuel Mohilewer and proposed settlement programs for Erez Israel that combined Torah study with physical labor. He was among the first rabbis to answer Theodor Herzl's call, and his joining the Zionist movement served as a great encouragement to Herzl in face of the opposition of most of the East and West European rabbis. He devoted much energy to propaganda for political Zionism among rabbis and Orthodox circles. Toward this end he published in 1902 the book Or Hadash al Ziyyon ("A New Light on Zion") in which he countered all the claims of those in the rabbinical circles opposed to Zionism. He participated in the first Zionist Congresses and was very close to Herzl, but he opposed the cultural work of the Zionist movement for fear that it would encroach on the status of religion. In 1902 he convened a large conference of rabbis and Orthodox people in Vilna and as a result the Religious Zionist movement, Mizrachi, was formed. Reines was the recognized leader of the movement and the outstanding personality at its founding convention in Pressburg (Bratislava; 1904). Many Orthodox rabbis, especially from Hungary, protested the convening of the founding conference and were against Mizrachi altogether. Reines answered them very sharply, sparing not even the greatest among them. He also founded the first journal of Mizrachi, entitled Ha-Mizrah (published in 1903 under the editorship of Ze'ev Jawitz). His great attachment to Herzl found expression during the controversy over the Uganda Scheme, when he proved to be an enthusiastic supporter of the plan. Despite all his public activities, Reines continued to write. Only a small portion of his works were published, and the rest remain in manuscript (in about 100 volumes). In Lida, he realized his greatest personal dream - the establishment of a modern yeshiva in which secular studies were taught side by side with traditional studies, all within the framework of the meticulous observation of tradition. The yeshiva was established in 1905 and achieved a distinguished reputation. Reines developed the educational principles of the yeshiva in the booklets Kol Ya'akov (1908), Mishkenot Ya'akov (1910), and others. Although the Mizrachi movement viewed the yeshiva as its own project, its maintenance rested on Reines' shoulders. While the institution was developing, World War I broke out and the suffering that it brought affected Reines' health. In the past few years some of his works have come out in new editions and in facsimile editions.