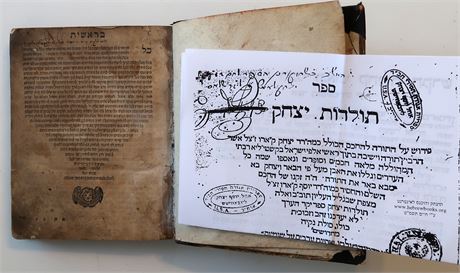 Commentary on the Pentateuch, which includes literal, homiletical, kabbalistic, and philosophical interpretations.<p>R. Isaac b. Joseph Caro (c. 1458 - c. 1535), Spanish scholar who lived at the time of the expulsion of the Jews from Spain in 1492. He was a native of Toledo, where he headed a yeshivah. Several years before the expulsion he moved with his yeshivah to Portugal. When the expulsion of the Jews from Portugal was decreed in 1497 he escaped to Turkey where he became one of the rabbis of Constantinople. There he published Toledot Yizhak (Constantinople, 1518. His book reveals him as a man of very wide culture. Its extreme popularity is evidenced by the fact that four editions were published in the short period of 14 years. In the introduction he describes the many hardships, including the death of his children, which he endured during his wanderings. He adopted his nephew, R. Joseph Caro, the author of the Shulhan Arukh, who frequently mentions him in terms of the highest admiration. He states his desire to settle in Erez Israel but it is not clear whether he was able to fulfill his wish. Only remnants of his other works remain. Three of his responsa appear in the works of R. Joseph Caro (Avkat Rokhel, Salonika 1791, no. 47, 48; Beit Yosef, Salonika 1598, on Even ha-Ezer, end). In his introduction to the latter work R. Judah, the son of R. Joseph Caro, declared his intention of collecting and publishing the rest of Isaac's responsa. Some of them are extant in manuscript (JTS, no. 0348). He also wrote novellae to tractate Ketubbot (Margoliouth, Cat, 535/2–3). His homilies under the title Hasdei David are in manuscript. Remnants of his commentary on Avot are quoted in the Midrash Shemu'el (Venice, 1579) of R. Samuel de Uceda.