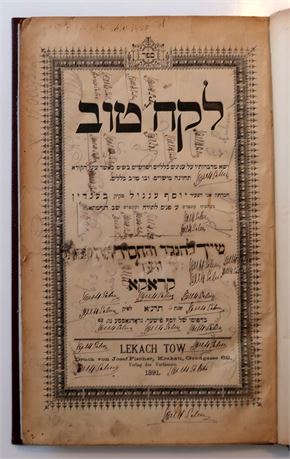 R. Joseph b. Judah Engel (1859–1920), Polish rabbi and halakhist. Born in Tarnow, after his marriage he settled in Bendin, where his father-in-law lived, and there became famous as one of the greatest of Polish rabbis. In 1906 he was elected av bet din of Cracow and was the virtual chief rabbi of the city, no one being appointed to the position during his tenure of office. At the outbreak of World War I he moved to Vienna where he died.

R. Engel wrote more than 100 works on halakhah, aggadah, and Kabbalah. His works comprise a sort of (mostly alphabetic) encyclopedia and include 30 volumes on Talmud; more than 20 volumes on Kabbalah; and five of responsa, novellae on talmudic themes and on the Shulḥan Arukh, and sermons. During his lifetime about 20 of his works were published, but the rest have remained in manuscript. After his death a committee of the friends of Engel was formed in Vienna, with the name "Ohavei Torah," for the purpose of collecting and publishing all his manuscripts. Some of them are in the process of publication, but many others were lost as a consequence of the Holocaust.

The following of his published works are noteworthy: Atvan de-Oraita (1891), giving 27 fundamental principles on talmudic methodology; Beit ha-Oẓar (Pt. 1, 1903; Pt. 2, 1907), on biblical themes, arranged in alphabetical order; Bet Porat, responsa (Pt. 1, 1907; Pt. 2, 1912); Oẓerot Yosef (1921), comprising eight sermons; halakhic novellae on the laws of the sabbatical year as they apply at the present time (1928); and novellae to Shulḥan Arukh Yoreh De'ah (1929). His revolutionary interpretation concerning the sabbatical year is noteworthy: even if the sabbatical year applies to modern times, it has only the force of a rabbinical enactment, whereas the mitzvah of settling in Ereẓ Israel is a commandment ordained by the Torah and hence completely abrogates the laws of the sabbatical year, thus making it unnecessary, in order to permit cultivation of the land, to have recourse to the expedient of selling it temporarily to a non-Jew. Other published works of his are Gilyonei ha-Shas, marginal notes on the Babylonian and Jerusalem Talmuds in three volumes (1924–37), containing source references, novellae, and comparisons. They testify to Engel's great erudition. He reveals points of similarity with the subject under discussion in apparently unconnected passages. Additional works are Hoshen Yosef (1945), novellae on the Maharit, and on the Avnei Millu'im of Aryeh Leib ha-Kohen; Gevurot Shemonim (1903), containing 80 solutions to a single problem; and Ẓiyyunim la-Torah (1904), consisting of 40 pilpulistic discourses. These last works in particular reflect Engel's keen and penetrating intellect. His approach to the Kabbalah is interesting in that he finds a parallel in the Talmud for every kabbalistic idea, and endeavors to demonstrate the close connection between Jewish mysticism and the rational part of the talmudic halakhah and aggadah. Recognized as an outstanding halakhist, he was consulted on halakhic problems by hundreds of rabbis.