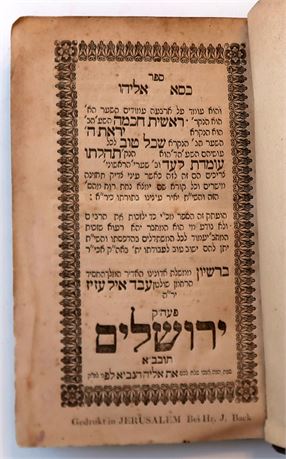 Kabbalistis ethical work attributed by Halevy to R. Elijah b. Suleiman (1818–1899) one of the best known Iraqi rabbis, was born in Baghdad, where he studied at the Beit Zilka rabbinical academy and was one of the outstanding pupils of R. Abdallah Somekh. In 1856 he settled in Erez Israel, first in Jerusalem, but two years later he moved to Hebron. He played a prominent role in the development of the Jewish community there. In 1865 he was appointed chief rabbi of Hebron and retained this post until his death. By nature an unassuming and generous man, he was outspoken and adamant in matters of religious observance. He made several journeys on behalf of the Hebron community: to India in 1873; Egypt, 1872 and 1878; and Baghdad 1880. In 1879–80 a fierce argument broke out between R. Elijah and two prominent members of the community, Mercado Romano and R. Rahamim Joseph Franco, which split the community into two factions. In the end R. Elijah's views prevailed. R. Elijah wrote several books dealing with traditional and mystical Jewish studies. Of these, the following were published: Zikhronot Eliyahu, a collection of religious precepts, arranged in alphabetical order, of which two parts appeared (Jerusalem, 1936, 1938); and Karnot Zaddik (Baghdad, 1867). Many of his responsa were published in the Jerusalem Me'assef and in the writings of contemporary rabbinic scholars.

The attribution to R. Mani by Halevy is doubtful as the Author on f.81v states that the "following are the words of my holy teacher Reb Hayyim (of Volozhin)". R. Mani (1818-1899) was in Iraq and Erez Israel not in Volozhin!!!